Apple is speeding up development on its electric car project, reports The Wall Street Journal, giving it a "committed project" label and targeting 2019 as a prospective shipping date. To facilitate a faster launch, Apple will be greatly expanding the number of people working on the car.

The go-ahead came after the company spent more than a year investigating the feasibility of an Apple-branded car, including meetings with two groups of government officials in California. Leaders of the project, code-named Titan , have been given permission to triple the 600-person team, the people familiar with the matter said.

Apple has already been aggressively hiring for its car project, poaching employees from companies like Ford, General Motors, Tesla, Volkswagen, and more. Many of its recent hires have expertise in connected and autonomous vehicle systems. 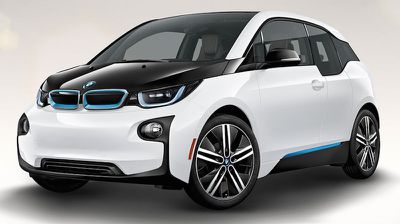 The BMW i3, which Apple reportedly considered using as a base for the Apple Car
Though there have been indications suggesting Apple is exploring autonomous vehicles as part of its car project, The Wall Street Journal's sources say the first car Apple releases will not be driverless, with that functionality perhaps coming at a later date.

There have been also other signs pointing towards expanded work on the car project. In May, Apple began looking into secure facilities in the Bay Area where a prototype could be tested, reportedly meeting up with officials at GoMentum Station, a secure test facility for connected and autonomous vehicles. Apple also met with DMV officials in August to discuss California's autonomous vehicle regulations.

It remains unclear if Apple will develop its "Apple Car" from the ground up or if it will team up with an existing auto manufacturer. Rumors have suggested Apple has held discussions with BMW over a potential partnership that would see the BMW i3 used as the basis for the Apple Car, but those talks have reportedly not progressed into a deal.

The Wall Street Journal warns that Apple's 2019 target date might not be the date in which Apple will actually ship the car, instead suggesting it could point towards the date that engineers confirm the main features of the product. It's also possible that given the scope of the project there could be delays, with "people familiar with the project" expressing skepticism that 2019 is a reasonable target date.

In an interview with Stephen Colbert last week, Tim Cook was asked about the car project, but he unsurprisingly avoided the question with a vague statement. "We look at a number of things along the way, and we decide to really put our energies on a few of those," he said.

xraydoc
"I just received my Apple Car yesterday, and I've discovered a small scratch by the left rear wheel well. Do you think if I took it to the genius bar they would swap it out for me? They better give me a new one instead of a white box refurb though! No way will I accept anything else.

Oh, I wonder if I could get them to give me the white one instead of the black I originally bought."
Score: 21 Votes (Like | Disagree)

zorinlynx
We need to attach magnets to Steve Jobs' corpse and set up some field coils around his grave. The spinning would generate enough energy to charge all the electric cars Apple produces for all eternity. And Tesla too.
Score: 9 Votes (Like | Disagree)

gugy
Sometimes I wonder if Apple is spreading themselves too thin getting into too many entire new industries and projects. The designer of me asks for more applications and computers development.
Score: 9 Votes (Like | Disagree)

AngerDanger
If people thought the Watch was good inspiration for exercise, just wait for people to start slimming down to gain compatibility with their Apple Cars.
Score: 8 Votes (Like | Disagree)