Apple senior legal counsel Mike Maletic held an hour-long meeting with the California Department of Motor Vehicles last month to review "autonomous vehicle regulations," according to internal documents obtained by The Guardian. The revelation comes amid widespread rumors that Apple has hired hundreds of employees to develop an electric vehicle over the past several months. 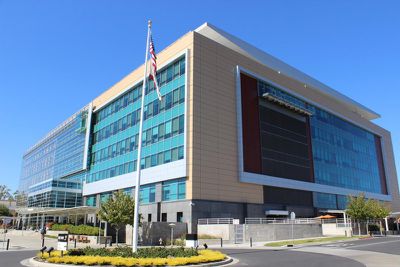 California DMV headquarters in Sacramento
Maletic reportedly met with a trio of DMV executives familiar with self-driving cars, including deputy director Bernard Soriano and chief of strategic planning Stephanie Dougherty, who are co-sponsors of California's autonomous vehicle regulation project. Brian Soublet, the department’s deputy director and chief counsel, was also in the meeting, according to the report.

California’s DMV is developing regulations for the eventual deployment and public operation of autonomous vehicles. These rules will establish requirements that manufacturers must meet to certify that their driverless vehicles have been successfully tested, meet safety criteria, and are ready for consumers to operate on public roads.

Apple would be required to obtain an Autonomous Vehicle Testing Permit from the California DMV to test autonomous vehicles on public roads, which Volkswagen, Mercedes-Benz, Google, Tesla Motors, Nissan, BMW, Honda and others have already done. Given the Cupertino-based company's culture of secrecy, however, that is an unlikely scenario.

If Apple does seek a testing permit for its Project Titan self-driving car, it will have to sacrifice much of its legendary preference for secrecy. Manufacturers applying for a permit have to detail the make, model and vehicle identification number (VIN) of cars they want to test, share details of autonomous features and capabilities, and identify test drivers by name.

If rumors about Apple testing an electric vehicle are true, it is more likely that the iPhone maker will use a private testing facility such as GoMentum Station, a 2,100-acre former naval base in the San Francisco Bay Area run by the Contra Costa Transportation Authority. Apple could also use its own property to test vehicles with complete privacy, something it may already be doing.

The report suggests the so-called "Apple Car" could be "almost ready for public view":

According to documents obtained by the Guardian, Apple has appointed an engineering program manager (EPM) to Project Titan. EPMs generally arrive on an Apple project once a product is ready to leave the lab, and coordinate the work of teams of hardware and software engineers.

Apple's rumored "Project Titan" electric vehicle research and development could be based at a top-secret office complex in Sunnyvale codenamed SG05, the report corroborates. Bloomberg reported in February that Apple aims to begin electric car production as early as 2020, but the company's roadmap is not entirely clear due to the highly secretive nature of the project.

Update: Representatives from the California DMV that spoke to Re/code have confirmed that Apple did meet with the DMV to discuss California's autonomous vehicle regulations.

"The meeting with representatives from Apple focused on a discussion of the autonomous vehicle testing regulations that went into effect in September of 2014," DMV spokesman Armando Botello said in an emailed statement.

Can they accurately reproduce realistic driving scenarios on that 2100 acre test facility? I would think it's hard to reproduce kids playing in the street, people walking animals, busy crowds in a downtown area, etc, without actually going out on public roads.

not to mention me wearing a tshirt with a stop sign logo on it
Score: 9 Votes (Like | Disagree)

I don't get the Apple Maps hate. Is it just here in Australia that it's good?
Score: 4 Votes (Like | Disagree)

By the time this 'Apple Car' is out Apple Maps will be on par with Google Maps, possibly even better.
Score: 3 Votes (Like | Disagree)

JeffyTheQuik
One thing about the self-driving cars I can predict:
1. If they follow the speed limit law, and don't exceed it, that will be bothersome at first, but then when people realize the other things they can do while the car is driving, that won't be much of an issue.
1.a. I predict that the first day of self-driving on the freeways will be the hardest, the first week will end with people doing small tasks (shaving, make-up, checking text messages) with the distractions not so looked down upon. In a month, I think that people will be reading while the car drives, surfing the net, movies, etc.
2. The insurance companies will have an interesting time with this. I think they will demand that an automated data recorder ("black box") is installed so they know if there was a driver caused or automated software caused accident. The political arguments will ensue...
3. Legislators will also have fun with this. I have a feeling there will be a lot of "thou shalt always have the automation on" laws, and "automation lanes" on the freeways, crowding out the non-automated lanes.
4. The first automated car vs. automated car accident will be interesting. Even more so, the automated car vs. non-automated car accident lawsuit will probably go to Federal Courts. The last, and most critical will be the automated car vs. pedestrian accident.
5. In 2040, the non-self driving cars will be like stick shift cars (in the US) are now. Interesting, but mainly for the enthusiasts.
Score: 3 Votes (Like | Disagree)

You just call for a car to come pick you up and take you somewhere, and the car does the job without any human being involved.

No need to worry about cost of buying a car, maintaining it, Insurance and other costs.
Cars will just become cheap taxi's, but tens of thousands of them.

Would you buy a car, and have it sit in a car park all day, or in your driveway all evening and night, when it could be out, by itself earning you money?

How long, during a week are people actually physically driving a car?
1 hour a day, if that.

Why buy a car? Just call for one when needed.

Major changes ahead. Car ownership will take on a totally new idea.
More change than people currently think there will be.
Score: 3 Votes (Like | Disagree)

Hey, looks like that car was driven by one of the locals from my neck of the woods!

I'm beginning to think even the stupidest AI will drive better than 2/3 of the residents of my state and 3/4 of the residents of a neighboring state I will decline to name. It's against the law to text or talk on cellphones where I live but I see it constantly. The drivers will not hesitate to mow you down. I'm very rarely a pedestrian in busy areas and very law abiding and considerate when I am one. But I've got some chilling anecdotes that are too long to recount here.

It's getting almost impossible to avoid close encounters with accidents almost anytime you decide to get on a road where I live. Even our police drive pretty recklessly and abuse the use of their sirens and lights. The school bus drivers pull some very dangerous maneuvers, too. And the amount of roadkill we have breaks my heart.

I do hope this tech will be viable and take over by the time I'm a little old lady. I'd love to have it in place now but I'm a realist. I know this isn't happening overnight.
Score: 2 Votes (Like | Disagree)
Read All Comments