Last year at about this time, we highlighted the biggest Apple leaks of 2010. While there wasn't quite as big a story as the iPhone 4 leak this year, we still saw a lot of early leaks of unreleased products. 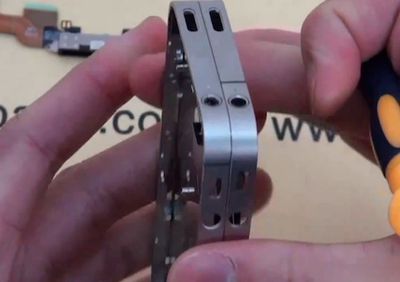 When this parts leak video was released in January 2011, we weren't entirely sure what we were looking at. Global Direct Parts called it an "iPhone 5" at the time, and detailed differences found in the new antenna design. The changes were relatively small, but what we know now is that this was the first look at the iPhone 4S design -- 10 months before its release. The antenna design looks a lot like the Verizon iPhone which hadn't been released at the time, but the inclusion of the SIM slot means this particular design was definitely for the iPhone 4S.

Over the year, we would continue to see bits of pieces of the iPhone 4S such as the front panel, A5-based logic board and even partially assembled. In the end, however, we kept getting distracted by the possibility of a completely new design. It was the similarities to the iPhone 4 design that kept the iPhone 4S so off the radar.

Ultimately, Apple itself accidentally leaked the iPhone 4S name in the last iTunes beta before the device launched:

No, that isn't a photo of the iPad 2. That's a photo of a dummy model that was shown at CES about 2 months before the iPad 2's launch. The model was created based on leaked case designs to Chinese accessory manufacturers. It's also why the leaked iPhone 5 case designs seemed like such a good possibility at the time.

A month before the iPhone 4S, an Apple employee accidentally posted this first photo from an unreleased iPhone device. As it turns out, that photo was taken by the iPhone 4S.

We had serious doubts about this iCloud login screenshot that was leaked several days before WWDC. But, it turned out to be quite accurate, and seems to have come from Apple's internal staging area for the site. We wouldn't see iCloud actually go live until two months later with essentially the same login screen.

In what almost became a replay of last year's iPhone 4 leak, an Apple employee lost another prototype iPhone in a bar this year. While there were some initial doubts about the story, the San Francisco Police did later confirm their participation in the search for the device. The lost iPhone was never found. We assume it represented a prototype iPhone 4S device which likely explains why it didn't ever draw enough attention to be leaked/sold to any gadget sites.

Yes, there are still some Mac related leaks too. The specs for the first Thunderbolt MacBook Pros were leaked about a couple of days ahead of the launch.


Again, this is not a video made about Siri after its launch. This was a video about Siri leaked before Apple said a word about it. The details are so close, it's hard to remember that some people doubted its accuracy.


As a bonus, here's the biggest fake rumor of the year. We knew it was a fake when we posted about it on our blog, but this video of an "iPhone 5 Leak" on Apple's website has amassed nearly 3 million views in YouTube since being posted. We suppose people wanted to believe.

wordoflife
Nothing will ever beat the iPhone 4 leak :D;)
Score: 15 Votes (Like | Disagree)

lilsoccakid74
I am still very surprised that we had zero rumors about the newest Mini's before launch!
Score: 8 Votes (Like | Disagree)

Nothing will ever beat the iPhone 4 leak :D;)


Hahahahahahahah yes! That was the best!
Score: 6 Votes (Like | Disagree)

adcx64
Interesting read, I was surprised that the 4S antenna band was leaked 10 months ahead!
Score: 4 Votes (Like | Disagree)


Looking back, the rumours this year were quite disappointing IMO, especially relating to the iPhone. I was, like many others, looking forward to the iPhone '5' I believed will be launched this year. The contradictory rumours about a release of an iPhone 4S/5 got me quite frustrated, yet excited. (feel sorry for those case manufacturers) We can probably blame Apple's stricter control of product leaks possibly because of the iPhone 4 leaks last year. Just hope 2012 has more leaks/rumours which seem to materialise.

Thank You MacRumors for your hard work in providing us with news and rumours we care about. ;)
Score: 3 Votes (Like | Disagree)
Read All Comments