The iPhone's Emergency SOS feature has saved a British snowboarder's life after he fell into a crevasse at 10,000 feet in the Swiss Alps, Australia's 7 News reports. 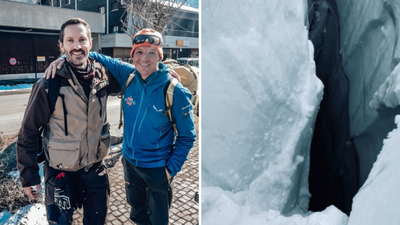 41-year-old personal trainer Tim Blakely was snowboarding alone at 10,000 feet in the Alps before falling over 13 feet into a hidden crevasse. Blakely landed on a fragile snow bridge that prevented him falling any further, but he believes he would have been totally stranded if not for his ‌iPhone‌'s Emergency SOS feature.

To activate the feature, Blakely pressed his ‌iPhone‌'s power button five times, triggering an emergency process that contacted the emergency services, transmitted his exact location, and messaged his emergency contacts. The feature was particularly useful since it did not rely on touching the screen, which was being dripped on by the melting snow and ice in the crevasse. Swiss rescue services were then able to come to Blakely's aid.

In a post on Instagram, Blakely thanked Apple and explained how the experience meant that his "appreciation for life changed dramatically." He went on to warn that even though he is a seasoned snowboarder with 17 years of experience, he was unprepared for the situation in the crevasse, urging other snowboarders to exercise caution in unfamiliar environments.

Emergency SOS has been an important ‌iPhone‌ feature since its introduction with iOS 11, and it has since expanded to the Apple Watch. The life-saving potential of various Apple devices, including the ‌iPhone‌, Apple Watch, and AirPods, have often been flagged in recent years, even being at the center of Apple's own marketing campaigns.

Monday August 1, 2022 2:26 am PDT by Hartley Charlton
The Apple Watch has been praised for saving yet another person's life after it led to a tumor diagnosis, Today reports. Maine resident Kim Durkee began wearing an Apple Watch two years ago to monitor her steps and get help in case she fell thanks to Fall Detection. During her sleep, Durkee's Apple Watch detected an irregular heart rhythm that suggested the presence of atrial fibrillation. ...
Read Full Article

Monday July 25, 2022 1:22 am PDT by Sami Fathi
Apple is preparing to launch a rare bundle of discounts for the iPhone 13, iPhone 12, and the iPhone SE in China next week, alongside accessories such as the AirPods and the low-cost Apple Watch. The promotion will run from July 29 until August 1 and will apply to not only iPhone models but also the third-generation AirPods, the AirPods Pro, and the Apple Watch SE, according to a notice on...
Read Full Article • 10 comments

Friday July 22, 2022 7:07 am PDT by Joe Rossignol
Apple has added a new "Test Alerts" toggle to the Settings app in iOS 15.6 and the third beta of iOS 16. The toggle is visible only on iPhones connected to a U.S. carrier and allows users to enable test emergency alerts from the U.S. government. Turning on "Test Alerts" enables test emergency alerts to be received on both the iPhone and Apple Watch. The toggle is located in the Settings app ...
Read Full Article • 62 comments