Twitter user @DongleBookPro has today shared images of a prototype iPhone 5s in an unreleased Black and Slate color. 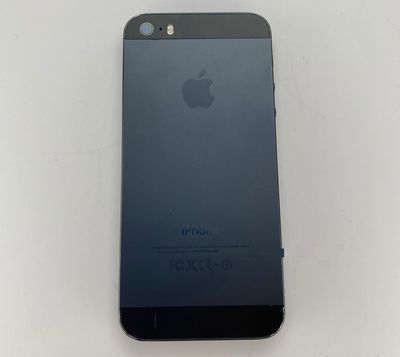 The ‌iPhone‌ 5s was launched in September 2013. The device featured Touch ID, a 64-bit processor, and a True Tone LED flash for the first time. Other new features included a five-element lens with an f/2.2 aperture, a 15 percent larger camera sensor, Burst Mode, and Slo-Mo 720p video capture at 120 frames per second.

While it is possible that Apple was considering offering the ‌iPhone‌ 5s in Black and Slate, before opting for Space Gray instead, DongleBookPro suggests that the color was likely used to help conceal the next-generation device during development.

In addition, it is also notable that the prototype ‌iPhone‌ 5s was manufactured in December 2012, a mere three months after the launch of the iPhone 5 and nine months before it would be announced. This offers some indication of how far ahead the ‌iPhone‌'s development cycle runs.

Black and Slate was among the more short-lived Apple device colors, with the option only being available for the ‌iPhone‌ 5, first-generation iPad mini, and fifth-generation iPod Touch. The finish also spurned "scuffgate," where some ‌iPhone‌ 5 users complained about the tendency of the Black and Slate finish to be easily chipped, scratched, and scuffed, which may have contributed to it being discontinued.

dannyyankou
I’m glad they went with space grey instead. That color looked so cool

thadoggfather
For the love of god, Apple make space grey slate again. Even if it has wear+tear consequences

And make space grey laptops the saturated black that the 13" polycarbonate MacBooks were, again.

I preordered my iPhone 12 Pro Max, and looking up the serial number shows it was manufactured in the first week of November.
Score: 10 Votes (Like | Disagree)

That unfortunately doesn't make much sense. For one, TSMC wouldn't even have the chips available for Apple until early to middle of the launch year.
Score: 9 Votes (Like | Disagree)

Serban55
So the same as the iphone 5....who cares?? after so long...whats the point of this ?!
Every manufacture made a lot of prototypes ...at least if it was something different
Score: 8 Votes (Like | Disagree)
Read All Comments