By MacRumors Staff on March 18, 2021
Jump to How Tos Articles

Touch ID is Apple's biometric fingerprint recognition system, used to verify Apple Pay payments and to supplement device passcodes and in-app passwords. First introduced in 2013, Touch ID is built into the Home buttons of the iPhone 5s through iPhone 8 and 8 Plus, the iPad mini 3 and later, the iPad Air 2 and later, 2017 and 2018 iPad models, and the 2015 through 2017 iPad Pro. Touch ID is also present on recent MacBook Pro and MacBook Air models.

Starting with the iPhone X in 2017, Apple began shifting away from Touch ID in favor of Face ID for authentication, and the iPad Pro followed suit in 2018.

Touch ID is built around a capacitive touch sensor that can read and analyze sub-epidermal skin layers to identify each person's unique fingerprint to make tasks like downloading apps and unlocking iOS devices more convenient. Touch ID is available in Apple's own apps and in third-party apps, allowing users to protect sensitive data like passwords or notes with a fingerprint.

Fingerprint data used for Touch ID is stored directly on each iOS device in a "Secure Enclave" and is never accessible in the cloud.

Friday September 22, 2017 9:07 am PDT by Juli Clover
There's an Emergency SOS feature built into iOS 11 that has hidden functionality -- it automatically disables Touch ID and makes it so your passcode has to be entered to unlock your iPhone. Because it essentially shuts down the biometrics on your device, you can't be compelled by a police officer or malicious person to unlock your iPhone with a fingerprint, nor can your fingerprint be used to...
Read Full Article (25 comments)

Wednesday March 23, 2016 1:34 pm PDT by Mitchel Broussard
Although more prominent features like Night Shift and a few new Quick Actions are getting the spotlight with the launch of iOS 9.3, one new lesser-known update is definitely worth checking out. In iOS 9.3, Apple has improved the functionality of its first-party Notes app with the ability to add password or Touch ID security for individual notes. The feature allows users to prevent access to...
Read Full Article (38 comments) 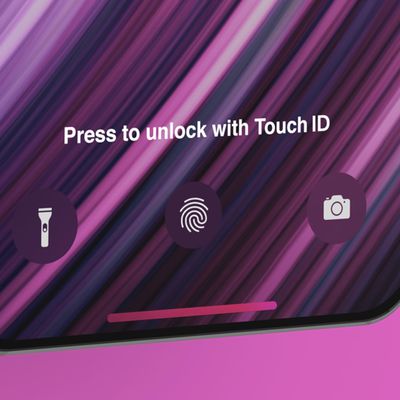 Thursday March 18, 2021 8:00 am PDT by Hartley Charlton
Apple is refining its as yet unused under-display fingerprint scanning technology, seemingly ahead of bringing Touch ID back to the iPhone, according to a newly-published patent application. The patent application, first spotted by Patently Apple and filed with the United States Patent and Trademark Office, is titled "Under-display fingerprint sensing based on off-axis angular light" and...
Read Full Article 103 comments

Friday March 12, 2021 7:43 am PST by Joe Rossignol
iPhone 13 models slated for release later this year will "likely" feature a fingerprint scanner embedded under the display for authentication, in addition to Face ID, according to Barclays analyst Andrew Gardiner and three of his colleagues. In a research note shared with MacRumors today, the analysts added that iPhone 13 models will feature a smaller notch and that the LiDAR Scanner will...
Read Full Article 224 comments

Thursday March 4, 2021 1:42 am PST by Hartley Charlton
Despite the hopes of some users that Touch ID will return to the iPhone via placement in the power button, reliable analyst Ming-Chi Kuo, who is usually in-the-know about what Apple is working on behind the scenes, has said that there no immediate sign of the change. In September of last year, Apple introduced the fourth-generation iPad Air with ‌Touch ID‌ integrated into its power button,...
Read Full Article

Wednesday December 9, 2020 9:57 am PST by Hartley Charlton
Although Apple has not included Touch ID on a flagship iPhone since the ‌iPhone‌ 7 in 2016, rumors are now indicating that the authentication technology could be making a return in next year's iPhone 13. Reliable Apple analyst Ming-Chi Kuo has repeatedly said that Apple is developing an ‌iPhone‌ with ‌Touch ID‌ integrated into its power button for release in 2021. However, this is expected ...
Read Full Article

Wednesday January 29, 2020 9:11 am PST by Joe Rossignol
Apple plans to release an iPhone with a Touch ID power button on the side of the device in the first half of 2021, according to analyst Ming-Chi Kuo. In a research note with TF International Securities, obtained by MacRumors, Kuo has now revealed that the iPhone will feature an LCD display, further suggesting that it will be a lower-cost model. Last month, Kuo claimed the device will lack Face ...
Read Full Article 113 comments

Monday September 9, 2019 6:37 am PDT by Joe Rossignol
Apple's vice president of product marketing Greg Joswiak recently spoke with the UK's Daily Express about the future of its biometric authentication systems, noting that while Face ID will be expanded to more devices over time, Touch ID will "continue to have a role" for the foreseeable future. "Certainly, we'll continue to put it on more devices but also ‌Touch ID‌ will continue to have a...
Read Full Article 140 comments

Bloomberg: Apple Planning iPhone With Both Face ID and Touch ID Under Display by 2021

Thursday September 5, 2019 5:31 am PDT by Joe Rossignol
Apple is developing an in-display fingerprint scanner for future iPhones, according to Bloomberg's Mark Gurman and Debby Wu. The report claims Apple is considering including the in-display scanner in a 2020 iPhone if testing is successful, but adds there is a possibility the tech will not be ready until 2021. This lines up with a prediction from noted Apple analyst Ming-Chi Kuo, who expects...
Read Full Article 195 comments

Monday August 5, 2019 3:23 am PDT by Tim Hardwick
Apple will launch an iPhone equipped with both Face ID and an on-display fingerprint sensor in 2021, according to a new investor note by Apple analyst Ming-Chi Kuo and obtained by MacRumors. Kuo's prediction is based on Apple's patents related to fingerprint on display (FOD) and the continued use of the technology in Android smartphones, which together suggest to him that Apple will opt to...
Read Full Article 250 comments

Monday July 8, 2019 5:57 am PDT by Joe Rossignol
Apple's latest iPhone ad humorously demonstrates how Face ID is more convenient and secure than Touch ID for user authentication. Timed with midsummer, the 30-second spot depicts a man napping on a reclining lounger in a backyard. After receiving a trio of iMessage notifications on his iPhone XR, he slowly raises the lounger to line up his face with the iPhone and unlocks the device with Face...
Read Full Article 238 comments

2020 iPhones May Have Full-Screen Touch ID, New iPhone SE Based on iPhone 8 Also Possible Next Year

Friday May 24, 2019 7:00 am PDT by Joe Rossignol
Barclays analyst Blayne Curtis and his associates today shared their expectations for both 2019 and 2020 model iPhones following their trip to Asia earlier this month, where they met with some suppliers within Apple's supply chain. MacRumors render of 2019 iPhones with triple-lens rear cameras Our summary of the research note, shared with MacRumors:The trio of high-end 2019 iPhones will have...
Read Full Article 352 comments

Monday April 22, 2019 3:55 am PDT by Tim Hardwick
The popularity of OLED smartphones with in-display fingerprint sensors will continue to gather pace in 2019, DigiTimes reports this morning, despite Apple's decision to move away from the technology in favor of face recognition. Citing industry sources, the report says that rising popularity for fingerprint scanners in smartphone screens is being driven by a reduction in sensor prices and the...
Read Full Article 73 comments

Monday January 14, 2019 3:20 pm PST by Juli Clover
Law enforcement officials can't force smartphone users to unlock their devices using fingerprints or other biometric features such as facial recognition, according to a Northern California court ruling from last week. The ruling, which was shared this morning by Forbes, was the result of an Oakland investigation into possible extortion. Police officers asked the court for permission to seize...
Read Full Article 65 comments

One Analyst Thinks the Next iPhone Will Have a USB-C Port, Smaller Notch, and Touch ID Under Display

Friday January 4, 2019 6:46 am PST by Joe Rossignol
At least one new iPhone released in 2019 will sport a USB-C port, smaller notch, and the return of Touch ID under the display, according to Jean Baptiste Su, Vice-President and Principal Analyst at consulting firm Atherton Research. Su shared his prediction in a Forbes column about Apple lowering its revenue guidance for the first quarter of its 2019 fiscal year:Although we believe that...
Read Full Article 309 comments

Friday November 9, 2018 1:02 pm PST by Juli Clover
Back before the iPhone X came out, there were rumors suggesting Apple would do away with the Home button by implementing Touch ID under the display of the device, preserving the fingerprint sensor while allowing for an edge-to-edge display. That didn't end up happening and Apple ultimately replaced Touch ID with Face ID, but since then, other companies have implemented in-display fingerprint...
Read Full Article 267 comments

Friday December 1, 2017 7:06 am PST by Joe Rossignol
Apple's current focus with Face ID is on single-user authentication, suggesting support for multiple faces won't be added in the near future, according to an email from the company's software engineering chief Craig Federighi. By comparison, Touch ID can store up to five fingerprints, and each of those fingerprints can belong to a different person. This allows a married couple, for example,...
Read Full Article 195 comments

Wednesday November 8, 2017 5:17 am PST by Joe Rossignol
Samsung has decided not to include a fingerprint scanner under the display of its next-generation Galaxy S9 and Galaxy S9+ smartphones due to continued technical difficulties, according to South Korea's The Investor. Instead, the fingerprint scanner will likely remain positioned on the back of each device, just like the current Galaxy S8 and Galaxy S8+ models. Fingerprint scanning is one...
Read Full Article 66 comments

Thursday July 27, 2017 11:55 am PDT by Joe Rossignol
Apple today updated its official Apple Store shopping app with the ability to use Touch ID to securely and conveniently pay for an order with a credit card tied to an Apple ID, as well as make changes to account settings. The Apple Store app has long allowed shoppers to pay for purchases with the credit card associated with their Apple ID, but users needed to type their password for...
Read Full Article 31 comments

Friday May 26, 2017 3:53 am PDT by Tim Hardwick
Apple has successfully finalized a solution to integrate Touch ID fingerprint recognition directly into the display of its upcoming "iPhone 8", according to a new report on Friday. Chinese-language Economic Daily News (EDN) said it spoke to sources from Apple supplier Taiwan Semiconductor Manufacturing Company (TSMC), who apparently confirmed Apple's achievement during a technology convention...
Read Full Article 231 comments

Saturday May 6, 2017 2:07 pm PDT by Joe Rossignol
Apple's rumored "iPhone 8" with an OLED display and wireless charging will continue to have Touch ID, but there is a "high chance" it will be on the back of the smartphone, says Hong Kong-based equity research firm CLSA. "iPhone 8" mockup with rear Touch ID sensor by Benjamin Geskin An excerpt from a research note distributed this week by CLSA analysts Sebastian Hou and Brian Chen:iPhone to...
Read Full Article 289 comments
Newer Posts
Archives
Older Posts