Twitter user @DongleBookPro has today posted images of what seems to be a first-generation iPod Touch prototype with a 2013 Mac Pro-style glossy black finish. 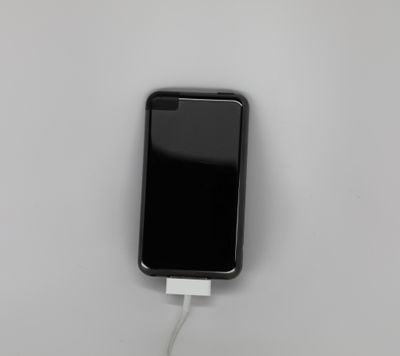 The Twitter user claims that the iPod Touch prototype pictured has "the same coating as the 2013 Mac Pro." Had the finish been selected for the final product, it also would have been similar to the metallic glossy black finish that was included on the special U2 edition of the fifth-generation iPod in 2006.

The glossy black ‌Mac Pro‌ was announced at WWDC in 2013, with a radical cylindrical re-design. The design proved to be highly divisive, and the device has often been unofficially identified as the "trashcan" ‌Mac Pro‌.

The first-generation iPod touch was released in September 2007. This prototype device, with no Apple logo on the rear, appears to vary considerably from the final released product. It retains the same plastic cut-out in the top-left corner, 30-pin connector, and lock button. Apple ultimately chose a mirror finish, which was similar to other iPods available at the time. The final mirror finish was criticized for its susceptibility to scratches.

Apple's glossy black finishes have similarly been criticized for durability. Apple warned users that its glossy Jet Black iPhone 7 would see "fine micro-abrasions" with use and instructed concerned customers to use a case, but no similar warning was given about other ‌iPhone‌ 7 colors.

I bet it’s fake. Anyone can claim that they have a prototype. It doesn’t even have an Apple logo on the back so I don’t believe it.

Prototypes don’t always have an Apple logo on them, it’s not like they need a reminder on who made it. If they are testing materials, they may not have made a decision on how to implement the Apple logo.
Score: 9 Votes (Like | Disagree)

I would love to see the back of it.

braddick
Ahhh, I simply thought it was the front with the screen turned off!
Score: 8 Votes (Like | Disagree)

sunapple
Jet Black iPhone 7 was my favorite finish, anything that makes the device look more like seamless solid block. This has that same vibe, sort of.
Score: 6 Votes (Like | Disagree)

Prototypes are cool, some people enjoy looking at hardware that never made it to the market. Especially Apple hardware. Take your negativity elsewhere.
Score: 5 Votes (Like | Disagree)
Read All Comments