Apple will launch a new range of subscription service bundles called "Apple One" as soon as October, according to a new report by Bloomberg's Mark Gurman. 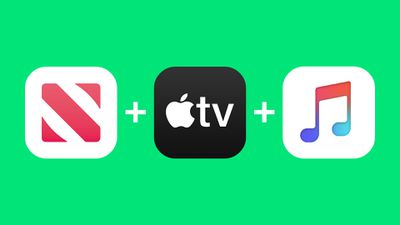 The series of bundles would allow customers to subscribe to several Apple digital services together. This is expected to result in a lower monthly price than when the services are subscribed to individually. Bloomberg reports that the ‌Apple One‌ subscription bundles are planned to launch in October alongside new iPhone models.

Gurman explains that there will be different ‌Apple One‌ subscription tiers. A basic package will include just Apple Music and Apple TV+, while a more expensive variation will add Apple Arcade. The next tier up will add Apple News+, followed by a more expensive bundle featuring iCloud storage. ‌Apple One‌ is not expected to include AppleCare support.

Apple is also believed to be developing a new service for virtual fitness classes that can be used via an app for the ‌iPhone‌, iPad, and Apple TV. The fitness service will be offered in the higher-end subscription bundle. Currently codenamed "Seymour" internally, the workout service would be set to rival virtual classes offered by the likes of Nike.

‌Apple One‌ will work with Apple's Family Sharing system that provides access for as many as six people. The bundles are expected to save customers around $2 to upwards of $5 a month, depending on the specific bundle chosen.

The motivation behind bundling subscription services would be to encourage customers to subscribe to multiple Apple services, generating more recurring revenue. ‌Apple News‌+ and ‌Apple TV+‌ in particular has not seen substantial growth, so bundling subscriptions would help to drive subscriber numbers. In late 2019, Apple experimented with creating a bundle of ‌Apple Music‌ and ‌Apple TV+‌ for students, with the latter being freely included.

Files found in iOS 13.5.5 referred to a "bundle offer" and a "bundle subscription." These files were not present in earlier versions of iOS. The files were said to be related to the "management system of Apple's own services subscriptions like ‌Apple News‌+." Apple has been rumored to be working on some kind of services bundle since 2018, and most of the rumors have indicated that the company will include ‌‌Apple Music‌‌, ‌‌Apple TV‌‌+, and ‌‌Apple News‌‌+ in the bundle offering.

infelix
Please give us the option to customize the bundle, choose 2 or more from these services and get a small saving, and make it available in Sweden thank you.
Score: 36 Votes (Like | Disagree)

SharkeyStormcrow
Give us a 1TB option for iCloud for crying out loud.
Score: 28 Votes (Like | Disagree)

daved2424
Bundling of services people don’t want. As opposed to making the services more attractive. Sure that’ll fix it. Who in the right mind would pay for News or TV+?
Score: 19 Votes (Like | Disagree)

supertiffany
the Apple Music and Apple TV+ bundle offer with a good pricing is a great deal.
Score: 18 Votes (Like | Disagree)

smaffei
Imagine that, a bundle option right before those one year free subs for Apple TV+ are set to expire.

Standard damage control. When services are not treading water, bundle them with ones that are surviving on their own. No one wants Apple News or Apple Arcade, the numbers show that. And, Apple is afraid that when those free Apple TV+ subscriptions lapse their retention rate is going to be abysmal. So, bundle them all with Apple Music since that service and the App Store are generating the lion's share of the services revenue.

Always be wary when a company doesn't release what their subscriber numbers are. They are hiding something.
Score: 15 Votes (Like | Disagree)
Read All Comments