WWDC was held online this year, but it was still packed with announcements, including iOS 14, iPadOS 14, macOS Big Sur, watchOS 7, tvOS 14, and Apple confirming its long-rumored plans to transition to its own custom-designed processors for future Macs. Sadly, there was no sight of a redesigned iMac, but that is still on the table for later this year. 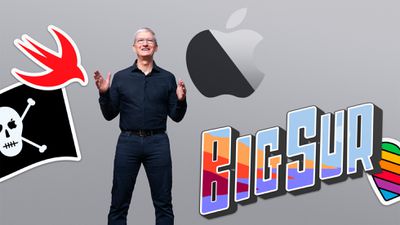 With so many rumors shared every week, it can be hard to remember exactly what was leaked ahead of a particular Apple event. For that reason, we have put together a list of accurate and inaccurate rumors in relation to everything announced this week. The list is not comprehensive, but it covers many of the biggest leaks and rumors that surfaced.

Looking ahead, there are still some rumors that remain to be seen, such as blood oxygen monitoring on Apple Watch Series 6 models in the fall and what proved to be a controversial claim that Xcode is coming to the iPad Pro by next year.

cmaier
Prosser seems to be the big loser here. Gurman will be happy.
Score: 26 Votes (Like | Disagree)

JPack
Prosser got slaughtered this time. That's what happens when you don't have supply chain sources and rely on leaks from marketing folks working at Apple. The guy even tried to pass around a fake image of AirPower as his own.
Score: 13 Votes (Like | Disagree)

Prosser got slaughtered this time.

he seems to have gone quiet, too? He promised to show some more information about his alleged airpower scoop when challenged by gurman, but i've seen nothing.
Score: 9 Votes (Like | Disagree)

now i see it
since it's well known that  has internal spies who's job it is to detect spies, it would be the oldest trick in the book to find leakers by intentionally seeding wrong information.
I suspect that most of the accurate "leaks" are actually intentionally doled out by ap to trusted sources (Gurman) to be presented as a "leak" just to keep the hype train going.
Score: 5 Votes (Like | Disagree)

He was wrong about iPhoneOS and hardware being released but for all we know it was pulled last minute which tends to happen.

At the time why would people doubt him as before this he was spot on with a good amount of leaks. His software guy got caught but he still has other sources he seems to say but wether they still give him info now after this who knows

Given how everything was pre-recorded, and very elaborately I might add, nothing was “pulled last minute.”

And even if it was, he’s still wrong. You don’t win a football game by having the high score up until the last play of the game.

the source though is fired though and who knows what else.

They could be sued for trade secret misappropriation.

Patentlyapple is the worst - they don’t even understand the difference between patent claims and a patent specification.
Score: 5 Votes (Like | Disagree)

XCode on iPad Pro is one that was floating around that did not happen.

That came from Prosser, so no surprise.
Score: 5 Votes (Like | Disagree)
Read All Comments