In a last minute series of tweets, leaker L0vetodream has posted a number of last minute predictions about WWDC 2020. Apple's WWDC kicks off on Monday morning with a live stream. A previous series of rumors suggested we'd see no new hardware at WWDC, which @L0vetodream agrees with saying "There will be no hardware tomorrow and Im sure Jon is right". 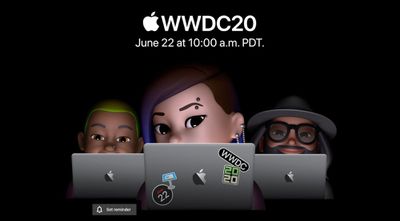 Beyond that, the Twitter account shares some details about the upcoming announcements. Most specifically, L0vetodream specifies "macOS Big Sur" as the name for macOS 10.16 which will also include a "redesigned UI" and "huge update" for Safari.

The other predictions are somewhat more vague, with this year being the "year of A14", Apple's own custom processor. The A13 presently drives the latest iPhones. tvOS and HomeKit integration are mentioned as well as watchOS updates including sleep and "hand wash monitoring function."

in my dream, Watch OS update the watch homepage, now can be shared through the link. Added in sleep and hand wash monitoring function. — 有没有搞措 (@L0vetodream) June 22, 2020

iPadOS is described with a redesigned Sidecar -- Apple's feature to turn an iPad into a secondary monitor for a Mac. Finally, "improved and enhanced hand written input is also predicted.

L0vetodream has previously had accurate predictions and normally writes their predictions in this sort of vague style.

Goldfrapp
I predict none of the following oddities in iOS will be changed (yet again):

ThisBougieLife
Wow, a redesigned UI for macOS. That could be cool. Hasn’t changed much since Yosemite.
Score: 13 Votes (Like | Disagree)

Overdue, when you receive a phone call and if hijacks your screen, ?‍♂️ You have to sit there like a idiot waiting for the call to stop, before returning to what you were doing.

hopefully rumor of widgets on home screen is true, be nice to see a refresh of the UI.
Score: 12 Votes (Like | Disagree)

nfl46
Incoming call for iPhone is not forced full screen.

THANK YOU, APPLE! I’d take that and some bug fixes and call it iOS 14. Lol.
Score: 5 Votes (Like | Disagree)
Read All Comments