Apple is testing new iMessage features internally, according to information obtained by MacRumors. While these features could potentially arrive as early as iOS 14, they could be held back until a later software update or perhaps never released.

For starters, there is a new Slack-like mention system that would allow users to tag other contacts with their name like @Joe or @Jane. When you type the @ sign, a list of suggested contacts would appear. This would be particularly useful in busy group chat conversations, as it would be possible to enable the "Hide Alerts" setting and only receive push notifications when you are mentioned directly. 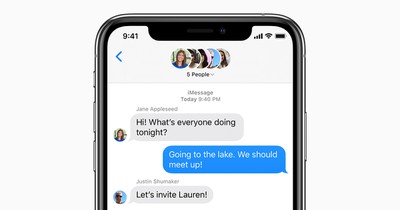 Apple is also testing the ability to retract iMessages after sending them. Fine print visible to both the sender and recipients would indicate that a message has been retracted. It is unclear if there will be a time limit on retracting messages.

Other features in development include typing indicators in group chats, as already exists in one-on-one iMessage conversations; the ability to mark the last message of a conversation as unread after opening it; and an expansion of the "/me" command for sharing status updates, a feature that has been available on the Mac since the iChat days.

Last year, developer Steve Troughton-Smith uncovered evidence of Apple working on a Catalyst-based version of the Messages app for Mac in macOS Catalina code, and a lot of the features described above would be fitting for the desktop. This could make Messages for Mac a more viable team-based chat app rivaling Slack.

For emphasis, there is no guarantee that Apple plans to make all or any of these features available in iOS 14, but testing has taken place in recent months. Keep track of all of the features and changes expected in our iOS 14 roundup.
Related Roundups: iOS 14, iPadOS 14
Tags: iMessage, Messages
Related Forum: iOS 14
[ 131 comments ]

And only one of my contacts doesn't use iMessage. These anecdotal games are fun.

Seriously though, there have been times when I wish I didn't hit send lol. A retract feature would be great.
Score: 22 Votes (Like | Disagree)

cesarbm
iMessage is missing a great feature that WhatsApp and Telegram do have that is reply to a specific chat message. Very useful in group chats when the conversation has carried on and one wants to reply to an specific comment. For years I have been expecting Apple to add this feature, but nothing.
Score: 13 Votes (Like | Disagree)

So many people have switched to platform-independent messengers like WhatsApp. These messengers happen to be also superior to iMessage when it comes to features and reliability.

arvinsim
Make it cross platform and I will use it.
Score: 12 Votes (Like | Disagree)

Meñito
No one of my contacts use iMessage.
Score: 9 Votes (Like | Disagree)
Read All Comments