Later this year, Apple is adding third-party music support to the HomePod, which will allow the speaker to work with services like Spotify and Pandora by default. 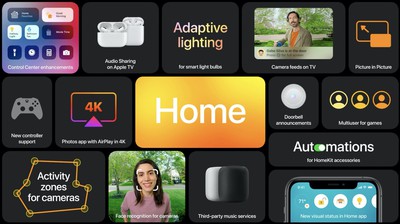 At the current time, third-party music services like Spotify can only be streamed on the ‌HomePod‌ using AirPlay and an iPhone, iPad, or Mac. The new feature will presumably allow Spotify and other music services to be set as the default music service, letting users ask Siri to stream music by specifying "with Spotify" at the end of a request.

Apple didn't mention the tidbit while introducing its new software updates, but the feature was highlighted when Apple was introducing new HomeKit features.

The new ‌HomePod‌ software is not available yet, so third-party music service support won't be able to be tested at this time. The ‌HomePod‌ is also getting a new option that will allow ‌Siri‌ to announce when a HomeKit-compatible doorbell is rung.

Apple Knowledge Navigator
They won't admit to it, but they've just waved the white flag.

Which begs the question... What is the point of HomePod if Apple isn't bringing any innovation to the market?
Score: 9 Votes (Like | Disagree)

Wig321
Dedicated EQ yet? Why can’t we say “hey Siri turn down the bass”? So frustrating always being in and out of the music eq preset menu.
Score: 7 Votes (Like | Disagree)

no. And use headphones at the beach, no one wants to hear your music

Not all of us visit public beaches, haha. That was just an example. Other examples: I could pair two HomePods or three at a party, or I could use some at my business when sharing a video/etc. It would open the device for much more.

Fanboys like you are annoying. I love Apple, but I'm not a blind sheep applauding a failing product that even Apple does not know what to do with anymore.
Score: 6 Votes (Like | Disagree)

HomeKit needs a hub which HomePod is one. Along with amazing sound it provides, seamless setup, and easy to use AirPlay experience.
Score: 4 Votes (Like | Disagree)

They won't admit to it, but they've just waved the white flag.

And now they are another Sonos. I like Sonos better thanks to Alexa.

Alexa is a train wreck

I like my 2 HomePods which I put in stereo mode. But somehow they not accessible from Home App. And you can not reset them when they are joined for stereo. So, I am stuck. They appear as Airplay 2 speakers but since I can not add them to Home I can update them or make any changes.

Anybody run into this and found a solution?

Never heard of your problem. You can reset them

This is a welcomed feature for many. I just wish they'd sell a Portable HomePod (oxymoron?) version. Sometimes I want to bring my HomePod to the beach with me. In fact, they should promote it as a speaker, not a Home device and it'd sell way better. Clearly it's not working as a Home device because its competitors significantly undercut the pricing. Yes, the Homepod is arguably a better product in terms of sound quality but Siri is rubbish.

no. And use headphones at the beach, no one wants to hear your music

They failed to bring people around their vision, so they are just resorting to damage control at this point.

not sure if I catch your meaning. HomePod is a great device, I love Apple Music and Homekit. Doesn't this just open it to more people? Is that a bad thing?
Score: 3 Votes (Like | Disagree)

They won't admit to it, but they've just waved the white flag.

HomePod is a platform (it runs a scaled down version of tvOS) and it should be able to stream from services other than Apple Music.