Rumors of Apple-branded over-ear headphones have been circulating for quite some time, while more recent rumors have mentioned an "AirPods Pro Lite" that could also be in the works, and Twitter leaker Jon Prosser's recent foray into Apple rumors provides a bit more detail on what we might able to expect for these products. 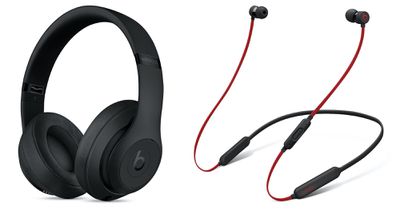 As for the "‌AirPods Pro‌ Lite" previously rumored by DigiTimes, Prosser says they are likely what he has heard are referred to as "AirPods X," which should launch in the September–October timeframe. He says these would be similar to the current BeatsX earphones, which are targeted at the sports market. He doesn't specifically say, however, whether the AirPods X would have a wire between the earbuds as BeatsX do. He also says the AirPods X, which carry a codename of B517, will be priced at around $200, which is double the price of BeatsX.

This makes me miss Steve Jobs so much. Remember when Apple made just a few insanely great products? Now they’ve got their brand on all sorts of crap.

Yeahhh that was almost a decade ago buddy. You don’t think if Steve was alive today that things at Apple would be much different than they are right now?

The tech industry changed a lot since 2011. At least Apple has solid footing in all of the new areas they stepped into.
Score: 19 Votes (Like | Disagree)

Logic368
This makes me miss Steve Jobs so much. Remember when Apple made just a few insanely great products? Now they’ve got their brand on all sorts of crap.
Score: 18 Votes (Like | Disagree)

I'm not a fan, but Beats has a loyal fanbase. Apple spent a TON of money to acquire the brand. I see no reason they would just drop the brand.
Score: 6 Votes (Like | Disagree)

This makes me miss Steve Jobs so much. Remember when Apple made just a few insanely great products? Now they’ve got their brand on all sorts of crap.

iPod, iPod Mini, iPod Nano, iPod Shuffle, iPod Touch.
A product for every use case and price point. How is this any different.
Score: 5 Votes (Like | Disagree)