iOS 14 may include a new PencilKit feature that will allow you to handwrite text in any text input field using Apple Pencil, with the handwritten content then converted into standard text before it's sent. So, for example, you might be able to tap into a Messages text field with the ‌Apple Pencil‌, hand write a message to someone, have it automatically converted to a more easily readable typewritten text, and then send it. 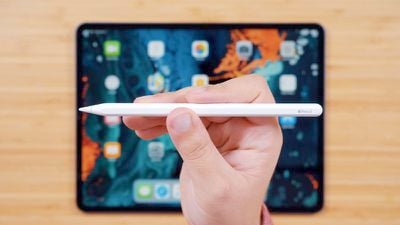 According to information obtained by MacRumors, the PencilKit feature appears to work with any text input field available in iOS, making it compatible with Messages, Notes, Reminders, Calendar, Mail, and more. A floating interface will pop up whenever a text field is tapped with the pencil, allowing for the written input.

Apple does not have a feature at this time that converts handwritten content into typed content, but the Notes app does have functionality that recognizes handwritten words and allows them to be searched.

It looks like third-party apps will also be able to access a PencilKit tool that will support some kind of new handwriting functionality, but the extent of it is unclear.

It is not known if this is a finalized feature that is going to make it into iOS 14. Rumors have indicated Apple is taking a new approach to iOS development that will allow certain features to be toggled off and sidelined if they are not ready for launch in order to cut down on bugs.

Along with the handwriting-to-text feature, Apple also appears to be working on a shape-drawing function that supports a "Magic Fill" feature, allowing users to draw a general shape with the ‌Apple Pencil‌ that's then filled in by iOS.

We'll be sharing more details on what we can expect to see in iOS 14, with our iOS 14 roundup serving as a hub for everything that's been found so far.

OriginalMacRat
Newton is back baby!!
Score: 25 Votes (Like | Disagree)

bugs , normal software company would push show of saying they have x y future but in the end how stable is it like now my waste of money buying camera adapter kit for usb purpose pen drive with ipad mini but only working on beta 4 ipad os not current stable version?

1) how about some punctuation? I have no idea what you are saying.
2) https://developer.apple.com/documentation/vision. They already spend massive amounts on this sort of problem. They aren’t going to buy somebody else’s solution.
3) are you Nebo’s mom or something? Your statements are very weird.
Score: 7 Votes (Like | Disagree)

I came here to comment this, but I knew in my heart of hearts it already had.