Apple is working on a new Apple Watch feature that detects blood oxygen levels, according to newly discovered code snippets in iOS 14 (via 9to5Mac). 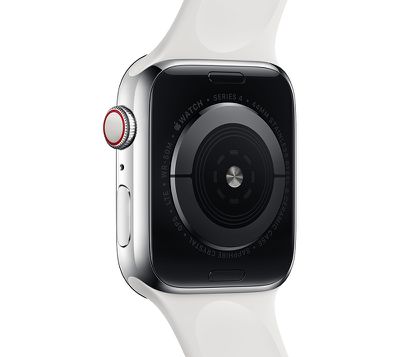 Blood oxygen saturation naturally fluctuates throughout the day, but large variations can be linked to health issues. For example, 95-100 percent oxygen in the blood is considered normal, but a drop below that percentage could be a sign of a serious respiratory or cardiac problem.

At the center of Apple's new feature is a new health notification based on blood oxygen levels – when Apple Watch blood oxygen saturation drops below a certain threshold, the wearer is alerted, just like existing heart rate notifications.

When the original ‌Apple Watch‌ was released back in 2015, iFixit actually discovered that Apple's heart sensors have the capability to monitor blood oxygen levels, but Apple has never activated it.

It remains to be seen whether the latest incarnation of the feature will rely on new hardware in the Apple Watch Series 6 or if it will come as a software update as part of watchOS 7, both of which are expected to arrive this year. Rumors persist that sleep tracking will also be included in the next Apple Watch model.

Other smartwatch and fitness tracker makers including Google-owned Fitbit already offer blood oxygen monitoring features in some of their devices, so Apple is playing catch-up in this regard, but that could mean the company has a more advanced implementation of the feature in the works.

It's quite illogical and stupid to wear a watch or iWatch for analyzing sleep behavior.

Are you serious??? Really? ? Tons of people want this! This is one of the reasons I have used Fitbit for years and still haven’t gone to Apple Watch! If they implemented this, I’d buy it right away!!
Score: 12 Votes (Like | Disagree)

It can be added to a Series 5 with an OS update. Apple Watches have had the hardware to measure it for years. The problem is accuracy. If Google/Fitbit are now doing it, it looks like accuracy is reliable enough now that Apple is willing to implement it.

Actually, this is false.

In order to measure SpO2 you require a red & infrared LED array - not green & infrared. Green LEDs are very good at detecting a pulsatile flow of a red substance (ie. Blood) even in tricky situations where there is lots of movement; red, not so much. This is why most fitness trackers use green LEDs for pulse rate detection during workouts.

Unless the old hardware has a dormant red LED which I’m pretty sure it doesn’t, this will require new hardware. But I would also question the need for it for the general public, unless it is coupled with sleep monitoring.

Disclosure: I’m an Anaesthesiologist (and an Apple Developer ;)).
Score: 8 Votes (Like | Disagree)

Not to say it's a bad thing, but wearing a smartwatch or iWatch isn't an intuitive approach for sleep analysis.

Are you sure? I’ve heard it’s quite illogical and stupid...
Score: 7 Votes (Like | Disagree)

m.x
While I hope this feature will be available for Series 4 watches, the more interesting part of this article is that 9to5mac got their hands on a part of iOS14. Is there more to come?
Score: 7 Votes (Like | Disagree)

shinkansenwarrior
Sp02 monitoring is the one thing that I felt was missing to make the iWatch a complete product IMO.
Let's hope this feature becomes available and I hope it can measure blood/oxygen levels accurately.
I am looking forward to seeing this.
Score: 7 Votes (Like | Disagree)

Not necessarily. The feature may require a new sensor or other hardware in the upcoming Series 6.