Apple's upcoming trio of iPhones will see an estimated 70-75 million units shipped from suppliers to Apple by the end of 2018, according to supply chain sources speaking to DigiTimes. Thanks to the expected solid performance of the iPhones this year, Apple's main supply partners TSMC and Foxconn are looking forward to new revenue highs in Q4 2018.

Specifically, if suppliers hit this range it will be the best performance for an iPhone since the launch of the iPhone 6 models in 2014. One of the main reasons for the boost is given to the "price-friendliness" of the 6.1-inch LCD iPhone, which Apple is expected to introduce as a cheaper alternative to the other two models: an updated 5.8-inch iPhone X and a larger 6.5-inch "iPhone X Plus," although Apple may not go with the "Plus" branding this year. 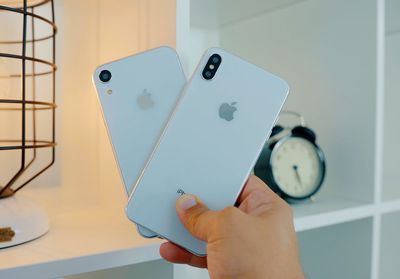 Most supply chain partners are expected to see revenues pick up significantly along with smooth production and strong shipment momentum before peaking in the fourth quarter of the year.

The impressive upgrades in overall designs and functions as well as the price-friendliness of the 6.1-inch model should give the new devices a shipment momentum much stronger than their two preceding generations, the sources said.

For TSMC, the supplier is expected to "fully recover" by the fourth quarter, following a "debilitating" computer virus that hit many of its fabrication tools in early August. Concern quickly spread about the company's inability to fill Apple's orders in the wake of the virus, but follow-up reports quickly suggested that TSMC would be able to "fill orders on time for Apple Inc.," ensuring no delays in chip shipments for the 2018 iPhones.

Yesterday, a report from Bloomberg provided a hint at one name that Apple has brainstormed for the 2018 OLED iPhones -- "iPhone Xs" -- but it's still unclear what the final names will be. The actual reveal event is now rumored to be held on Wednesday, September 12 at Steve Jobs Theater, according to two unnamed sources speaking to French radio station Europe 1, followed by iPhone pre-orders kicking off on Friday, September 14.

Despite concern over sales figures quickly dropping after first-adopters purchased the ten-year anniversary iPhone X, the flagship device performed well in Q4 2017 and remained popular among customers throughout 2018. Addressing concerns over dwindling sales and those worried about numbers, Apple CEO Tim Cook in May said: "I think it's one of those things where a team wins a Super Bowl. Maybe you want them to win with a few more points, but it's a Super Bowl winner and that's how we feel about it."

DNichter
I am confident Apple will have a monster quarter. My guess is many people held out buying the X (although it still sold very well) due to cost and it being a first generation device. Now that they are expanding the design to 2 new models, one being much more affordable, while also reducing costs on the high end, it should entice a lot of buyers. Apple is in a great position as their products last so long, it creates a steady stream up upgraders year after year. There really isn't a viable competitor to the iPhone currently.
Score: 17 Votes (Like | Disagree)

don't imagine sales to top a brand new design style. This is basically the 6SSSS
A new form factor might change that.
Dropping the notch will help also.

There's nothing wrong with the notch. At all. That section of the screen is used for pull down notifications on the left of the notch and control center on the right. The notch also displays wifi, time, etc.. things that screen real estate was previously using. The notch has function. People that hate on it have probably never used the X for more then a week to realize it has function.
Score: 13 Votes (Like | Disagree)

Wasn’t there a report just a month or so ago claiming sales would be low this year due to the tepid response to the X and higher ASP?

Yes they did. I have an X so I am not in market for a new phone as I keep them 2-3 years. That said the other 4 people in my house using iPhones did not really care for the X any more than there current 7's. In fact none of them want to leave the button for Face ID. I imagine some of them will go with a cheaper 8 after price adjustments.

At some point the higher and higher ASP is going to cause a shift and not in Apple's favor. In my house I am the last person with a Mac for this reason. My daughter was shopping for a new laptop for her first year of college and went for a Lenovo Yogo, 16gig, 1TB SSD...etc....etc and saved $1000 over a comparably speced 13inch Macbook Pro. She will have that laptop for 4 years or more and Apple with their higher ASP on Macbooks ($1799 entry point for 8th gen 13inch Macbook Pro) lost a customer, probably for life.

I have a 2017 15inch Macbook Pro but with all the things I do not like about it over my 2013 15inch Macbook Pro (that I sadly sold) and seeing where the 2018's went, this will be my last Mac. I am even considering selling it and making the move to Windows now. Apple for our family will be a iOS only kind of thing, which I honestly think is Apple's goal. That is until they price more and more people out of the iPhone market.
Score: 11 Votes (Like | Disagree)

Zxxv
Yea right haha those prices haha believe it when I see it.

Though in all seriousness what those prices would tell me is the x didn’t sell as well as they’d like and they can’t justify a £1500/$1500 iPhone X plus model this year.
Score: 10 Votes (Like | Disagree)

johnyslats
Did someone say 'super cycle'? ;)
Score: 9 Votes (Like | Disagree)
Read All Comments