A new report out today by Bloomberg's Mark Gurman and Debby Wu further confirms a bevy of rumors centering upon Apple's three 2018 iPhones. Expected to be revealed at an event in just a few weeks, the iPhones will all look visually similar to last year's iPhone X, but "boast a wider range of prices, features, and sizes to increase their appeal."

According to people familiar with Apple's launch plans, some inside of the company have referred to this year's launch as an "S year," designated for years when its smartphones keep the same design of a previous generation but bump up internals and add new features. "The company is planning more significant changes for next year," the people said. 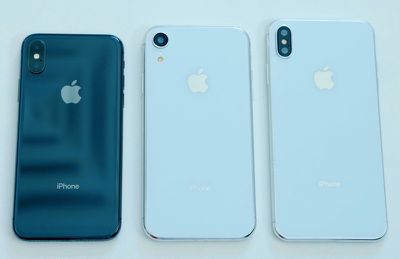 One of the tidbits from today's report focuses on the naming scheme for this year's iPhone models, which appears to have caused somewhat of a "naming conundrum" within Apple. The company reportedly considered going with "iPhone Xs" for the OLED models, akin to the iPhone 5s, iPhone 6s, etc., but has "altered the name multiple times," so it's unclear what Apple finally landed on. We'll have to wait a few more weeks to know the official names of the 5.8-inch, 6.1-inch, and 6.5-inch iPhones.

The new iPhone lineup has presented Apple with a naming conundrum, according to a person familiar with the deliberations. The company will be selling three phones that look similar and all have Face ID. But the cheapest model will be larger than the mid-range version, potentially confusing consumers.

While planning the new devices, Apple has altered the names multiple times. It has at least considered branding the new premium phones the "iPhone Xs," indicating that they’re an upgrade to last year’s iPhone X, the person said. The company has also weighed eschewing the "Plus" label for the larger model, which it has used since the iPhone 6 Plus launched with a larger screen in 2014. The final names could be different, the person noted.

Reiterating on previous rumors, Bloomberg mentions that Apple will launch a 6.5-inch "high-end" iPhone this year with a glass back, stainless steel edges, dual cameras, and an iPad-like landscape view. This would introduce a feature similar to iPad and previous "Plus" iPhones, although Apple has been thinking about ditching the "Plus" label this year.

There’ll be a new high-end iPhone, internally dubbed D33, with a display that measures about 6.5-inch diagonally, according to the people familiar with the matter. That would make it the largest iPhone by far and one of the biggest mainstream phones on the market. It will continue to have a glass back with stainless steel edges and dual cameras on the back.

The big difference on the software side will be the ability to view content side-by-side in apps like Mail and Calendar. It will be Apple’s second phone with a crisper organic light-emitting diode, or OLED, screen.

For the upgrade to the 5.8-inch iPhone X, the "main changes" will be iterative updates to processing speed and the camera. Lastly, the low-cost 6.1-inch iPhone will also look visually similar to the iPhone X, but include multiple color options, include aluminum edges instead of stainless steel, and have a cheaper LCD screen. According to the sources, "the cheaper version's aluminum edges won't necessarily be the same color as the colored glass back," similar to the way the White/Space Gray of the iPhone X's back did not affect the color of the silver stainless steel edges last year.

Further confirming previous rumors, all three models will have Face ID, and the two larger iPhones will have dual-SIM card slots "in at least some regions." Previously, analyst Ming-Chi Kuo reported that the 6.1-inch iPhone would come in two models, one that includes a single SIM and a second that offers dual-SIM card slots. Today Bloomberg suggests the 6.5-inch model will get this feature as well.

Today's report also briefly mentions a "nearly edge-to-edge" Apple Watch, while confirming compatibility with existing Apple Watch bands. The next iPad Pros will measure around 11-inches and 12.9-inches with slimmer bezels and Face ID, although anyone awaiting an update to the iPad mini will again be disappointed this year as this model "won't be upgraded."

OldSchoolMacGuy
Less than a month from release, I guarantee they already have the name picked out and marketing has been cranking away at preparations for months.

This is the kind of reporting that's simple to get some web clicks. It doesn't matter if it's true or false. Claim that Apple is considering naming it the iPhone X Nachos and when it doesn't happen you still don't look bad as it was simply your claim that they were CONSIDERING it.
Score: 14 Votes (Like | Disagree)

iapplelove
I’m sticking with iPhone X another year. Love the phone. I wouldn’t mind a bigger version, but my iPad really needs upgrading. And I’m not about to dump money on two devices since I paid a grand less than a year ago (November) for the X lol
Score: 8 Votes (Like | Disagree)

This already works just fine for all the computers and even the regular ipad. Just append year for consecutive years and be done with it.

Or drop the (OLED) part and just call them Pro. They already use that for ipads and macbooks so it makes perfect sense
Score: 8 Votes (Like | Disagree)

nwcs
It’s time for Apple to end the madness as others have said. It should just be iPhone and whatever variant models like iPhone Plus and iPhone Cheap or something like that. They messed up their numbering with the X and should just drop it now.
Score: 8 Votes (Like | Disagree)
Read All Comments

Tuesday January 24, 2023 1:11 pm PST by Joe Rossignol
While the new Mac mini with the M2 chip has a lower $599 starting price, the base model with 256GB of storage has slower SSD read and write speeds compared to the previous-generation model with the M1 chip and 256GB of storage. A teardown of the new Mac mini shared by YouTube channel Brandon Geekabit reveals that the 256GB model is equipped with only a single 256GB storage chip, while the...
Read Full Article • 509 comments