The iPhone X accounted for 35 percent of total worldwide handset profits in the fourth quarter of 2017, according to new estimates shared this morning by Counterpoint Research.

The device generated 5x more profit than the combined profit of more than 600 Android OEMs during the quarter, despite the fact that it was only available for purchase during the final two months of the year and in spite of reports pointing towards lackluster sales of the device. 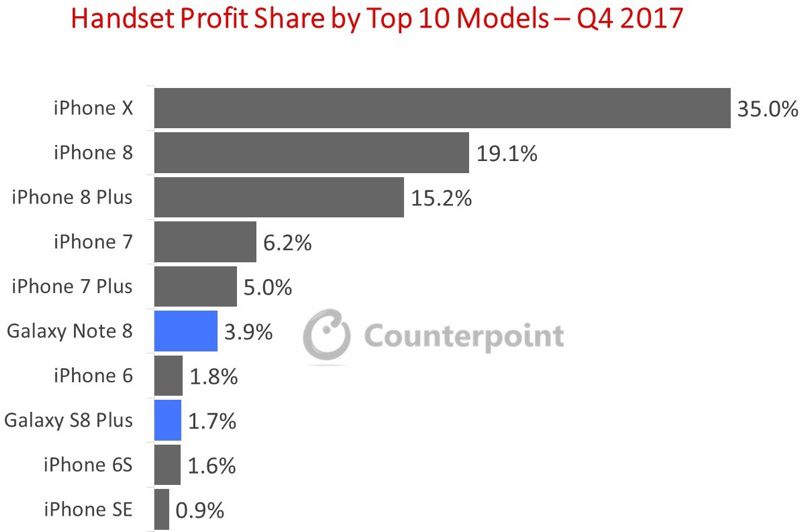 Other Apple iPhones, including the iPhone 8, iPhone 8 Plus, iPhone 7, and iPhone 7 Plus accounted for a second large chunk of global handset profits, with iPhones holding 8 of the top 10 profit share rankings. Apple was the most profitable brand with 86 percent of total handset market profits.

While overall global handset profits declined by one percent compared to the fourth quarter of 2016, Apple's profits grew one percent year over year.

"Global handset profits declined 1% YoY, but Apple grew 1% YoY even with the iPhone X being available for only two months in Q4 2017. The iPhone X alone generated 21% of total industry revenue and 35% of total industry profits during the quarter and its share is likely to grow as it advances further into its life cycle. Additionally, the longer shelf life of all iPhones ensured that Apple still has eight out of top ten smartphones, including its three-year-old models, generating the most profits compared to current competing smartphones from other OEMs."

Apple does not break out iPhone sales by device, so it is difficult to confirm Counterpoint Research's specific numbers, but Apple did set new revenue records in Q4 2017, earning $10.7 billion on $52.6 billion in revenue. The company sold a total of 46.7 million iPhones during the quarter.

Similar reports and estimates published in the past have also confirmed that Apple's iPhones bring in the lion's share of smartphone industry profits, earning significantly more than its closest competitors like Samsung and Huawei. Apple has been the most profitable smartphone company for several years running.

csurfr
I guess the X isn't the failure that so many wanted it to be.
Score: 62 Votes (Like | Disagree)

thermal
No wonder other companies are falling over themselves to copy the iPhone X look.
Score: 33 Votes (Like | Disagree)

apolloa
Just more proof how overpriced the iPhone X is. Massively so looking at this report. One hell of a markup.

Video of Steve Jobs himself advising of the dangerous path Apple is following:

Video originally posted in this thread in the following post:

It's talking about profits, not individual devices. This means Apple has high margins, which most people knew.
Score: 29 Votes (Like | Disagree)

You're making a mistake in assuming the cost to produce the iPhone X is the same as every other phone. It's not. The iPhone X packed tech no other phone has and the development costs were more because of it.
Score: 25 Votes (Like | Disagree)
Read All Comments