Apple might delay the launch of its new, low-cost 6.1-inch iPhone by one month and launch the device in October, according to Morgan Stanley analyst Katy Huberty (via Barron's). Huberty cites suspected issues with "LED backlight leakage" leading to the "possible" one month delay in mass production on the 6.1-inch iPhone. 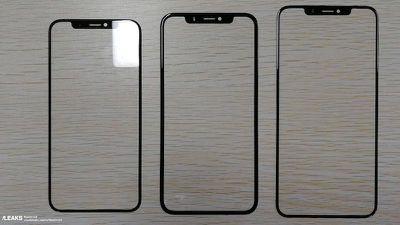 Alleged front glass panels for the 2018 iPhones, with the 6.1-inch model in the middle
The problem was worse in the original production forecast, according to the new report, as there was originally a rumored six week delay for the 6.1-inch device. Now, Huberty says the cheaper smartphone will launch in October, while the second generation 5.8-inch iPhone X and 6.5-inch "iPhone X Plus" will "see no delay" and debut in September. All three devices are expected to be revealed during an event in September.


We currently see no delay in the ramp of Apple's upcoming flagship 5.8" or 6.5" OLED iPhones. However suspected issues with LED backlight leakage have caused a 1 month delay in mass production of the 6.1" LCD iPhone, although this is down from a 6-week delay baked into the original production forecast, according to suppliers.

The six week delay for the LCD model was previously mentioned in a report earlier this year that predicted the LCD model wouldn't launch until November 2018, but otherwise the belief has been that Apple will release all three devices in September 2018.

If the 6.1-inch model doesn't make a September debut, Apple will likely lose a few sales to customers who are interested in a new iPhone model but still don't want to pay upwards of $800 in full for the OLED devices. Because of this, Huberty sees Apple delivering a "slightly weaker-than-consensus September quarter."

This is a similar sentiment that the iPhone X, iPhone 8, and iPhone 8 Plus gained when Apple split up their launches last year, although somewhat reversed given that the flagship iPhone X was the delayed device in 2017.

now i see it
I call BS. Apple has been making LCD screens since iPhone 1. There's never been an issue with them. If the 6.1 is delayed, it will be because of marketing decisions.
Score: 24 Votes (Like | Disagree)

recoil80
I know is July when I begin reading about iPhone delayed due to production problems.
Score: 14 Votes (Like | Disagree)

Endorphine88
It would be a way to push OLED sales first, before they offer a "budget" version. I love that a $700 is considered "budget" in Apple's world.
Score: 11 Votes (Like | Disagree)

I don’t understand why Apple charges such a premium for oled, when it’s being used in basically every other manufacturers flagships for much cheaper.
Oled is nice. Not worth $500 (australian) premium at all.

Manufacturing costs play a factor. The OLED in the X has to be bent at the bottom to avoid a bottom chin/bezel. This is something no other manufacturer has been able to do. Face ID also added to costs significantly, which is another feature no manufacturer has been able to replicate due to costs. Apple is a premium brand that sells a premium product, cheap android manufacturers can't offer the same features due to cost.
Score: 7 Votes (Like | Disagree)

nfl46
Yeah, right! Lol. Apple wants you to spend your $ on the more expensive iPhones first. That 1 month will turn into a December release. Sucks from a consumer aspect.
Score: 6 Votes (Like | Disagree)
Read All Comments