Apple has made it easier than ever for users to create custom watch faces on their Apple Watch in iOS 11, thanks to a new share sheet option within Photos on iPhone.

On the current operating systems for iPhone and Apple Watch, users can choose a "Photo" watch face to add to their Apple Watch, but the only way to change the picture is to customize the face on the Apple Watch and swipe left and right through photos in a synced album. "Photo Album" is also available, which automatically shuffles up which picture will appear on Apple Watch -- again, within a selected album -- each time the wrist is raised. 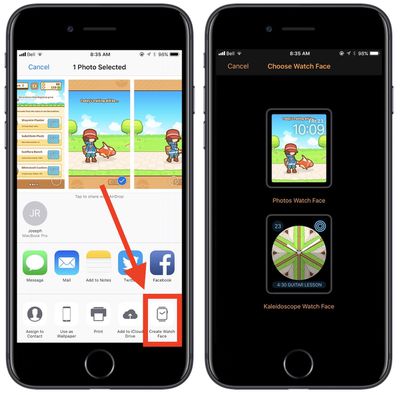 Now, Apple has added in a simple new share sheet to Photos on iOS 11, as spotted by French site Watch Generation [Google Translate]. After a photo is selected the sheet gives the option to "Create Watch Face," then users have to choose which face they prefer: a typical photo face where the image is presented as normal, or they can turn the image into one of Apple Watch's new kaleidoscope faces.

For the Photos face, users can now also select 10 custom images directly within the Watch app to add into the photo rotation of the watch face. This should make creating a custom Photos watch face much easier than the current method in iOS 10, where users either have to choose from one of the pre-set albums in iOS, or go into the Photos app to build a custom one with the images they want to see on their Apple Watch face.

For the kaleidoscope watch face, Apple appears to have multiple pre-set images to choose from that result in the distorted images seen at WWDC this week, including a flower and a few of the colorful exploding sand imagery already available as iOS wallpaper options. When users add in a custom image, it'll appear at the end of this list. There are also custom styles of kaleidoscope to choose from, including one that distorts images with triangular geometry ("Facet") and one with softer circles ("Radial").

Check out previous MacRumors coverage from WWDC week for more iOS 11 tidbits, including easier Wi-Fi password sharing, new AirPods controls, Control Center customization, QR code support in Camera, and more. There's also our hands-on video with the new iOS that walks through a few of the biggest additions to the iPhone software, which will launch for everyone sometime this fall.

Relentless Power
This is interesting. But what the Apple Watch really needs, is its own watch face store with an array of watch faces that the user can choose from. And allow a developer kit that the developers can have access to and create hundreds of watch faces to expand on the ones they have currently .
Score: 28 Votes (Like | Disagree)

576316
Not good enough. Why aren't Faces open to developers yet? This is the killer customisation feature that the Watch really needs. Keeping a tight control over it is garbage.
Score: 10 Votes (Like | Disagree)

LordQ
Users: We want to be able to customize the hands, the minute and hour marks, and add the Monogram to more faces!
Apple: Here's the Kaleidoscope face!
Score: 10 Votes (Like | Disagree)

This is interesting. But what the Apple Watch really needs, is its own watch face store with an array of watch faces that the user can choose from. And allow a developer kit that the developers can have access to and create hundreds of watch faces to expand on the ones they have currently .

This. It seems like a no brainer. People like having the ability to personalize. If anything the sheer amount of watch bands on offer, OEM and 3rd part, should give Apple an indication that personalized watch faces is a good idea that would be nearly universally appreciated by AW owners.
Score: 7 Votes (Like | Disagree)

MrGimper
The new watch faces are only useful to 5-year-olds or people who want to relive their LSD experiences of the 60s. Everyone else is out of luck.
Score: 5 Votes (Like | Disagree)

Vanilla35
While I think it's great that they're continuing to add to customization...at least let devs create watch faces. I would think that would be one of the top 5 features of a smart watch before it's released, not something that's still being tinkered with 3 generations in and 4 watch OS's later.

What harm could it do?
Score: 4 Votes (Like | Disagree)
Read All Comments