Apple on Monday introduced iOS 11, the next major version of its mobile operating system for iPhone, iPad, and iPod touch. The software update, available this fall, includes a completely redesigned Control Center that fits on one page and is much more customizable thanks to 3D Touch. 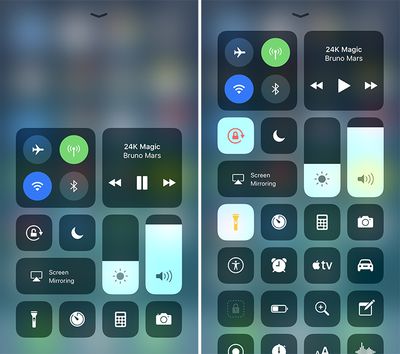 Control Center's default appearance (left) and with additional controls (right)
When you deep press on the Music pane, for example, a larger pane with volume, playback, and other controls pops open. Likewise, when you deep press on the pane with Airplane Mode, Wi-Fi, Bluetooth, and Cellular Data toggles, a larger pane pops open with AirDrop and Personal Hotspot toggles.

More granular controls appear by deep pressing with 3D Touch
On iOS 11, users can add and organize additional controls and toggles to appear in Control Center through the Settings app. However, the following controls are default and cannot be hidden: the system toggles pane, music, orientation lock, brightness, volume, Do Not Disturb, and AirPlay Mirroring.

Control Center still lacks a truly customizable drag-and-drop layout, but the return to a single-page design and some customizability are welcomed improvements. The ability to add additional controls such as Low Power Mode and Accessibility Shortcuts will also be appreciated by many users.

The first iOS 11 beta was released to registered Apple developers on Monday. A public beta will be available in late June through the Apple Beta Software Program. The software update should be officially released in September.

teddybearstand
Control center looks like a mess and using the volume and brightness scrollers are quite terrible. The customization is welcome, but I hope this design changes before the GM.
Score: 43 Votes (Like | Disagree)

44267547
Maybe I am a minority, but 3D Touch is one of my favorite features on the iPhone. I use it for absolutely everything, and it's a huge convenience and shortcut. I think this will play nicely with the control center.
Score: 40 Votes (Like | Disagree)

BigDO
What a mess. iOS losing the polish and going towards Android like chaos.
Score: 37 Votes (Like | Disagree)

iapplelove
It's going to take a little bit of getting use to the new cluttered control center layout.
Score: 26 Votes (Like | Disagree)

mcfrazieriv
The complexity of these screens gets worse and worse with every release. What in the heck is going on internally?
Score: 24 Votes (Like | Disagree)

mkeeley
Not exactly stylish is it?
Score: 20 Votes (Like | Disagree)
Read All Comments