Monday October 5, 2015 7:01 am PDT by Mitchel Broussard
Apple has retained the number one spot in Interbrand's annual ranking of the world's most valuable brands, a position it has held onto since 2013 when it knocked Coca-Cola out of the top spot. Following close behind the Cupertino-based company are brands like Google, Microsoft, and Samsung in second, fourth, and seventh place, respectively. 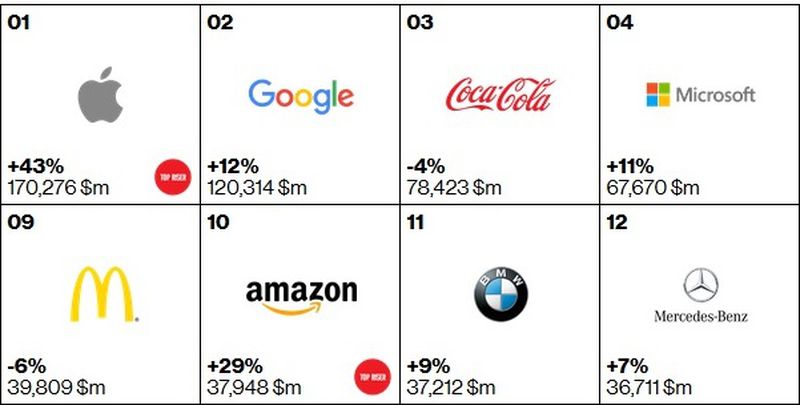 Since last year's ranking, Apple has grown in brand value a total of 43 percent, earning it one of Interbrand's "Top Riser" designations. Overall, the company increased from $118.9 billion last year to $170.3 billion in this year's survey, up a total of about $51.4 billion in brand valuation from 2014 to 2015. Other companies like Amazon and Facebook, which saw increased growth in 2015, also earned a "Top Riser" spot.

A handful of big launches helped make Apple's 2015 a notable one, including the Apple Watch's release in April and the announcement and launch of the iPhone 6s and iPhone 6s Plus just a few weeks ago in September. In their opening weekend alone, the new iPhones sold a record-breaking thirteen million units, beating out last year's ten million units for the iPhone 6 and iPhone 6 Plus. The company also announced the iPad Pro, all-new Apple TV, and a handful of new Apple Watch features and bands at its "Hey Siri" event on September 9.

chromite
It's awesome to see so many American companies on the list! People can say what they want about the current state of America but we've churned out some awesome stuff.
Rating: 7 Votes

Unrelated to your post: It seems a lot of people are confusing what this list is. Brand value has nothing to do with healthy food (McDonalds) or drink (Coke). This is more about brand recognition and how it enhances the company. There are a number of alcoholic beverage companies and fast food companies on the list.
Rating: 5 Votes

CEmajr
Not only first but first place by quite a significant margin.
Rating: 3 Votes

4jasontv
I can't fathom how much better my life would be if I was unfamiliar with McDonald's or Coca Cola.
Rating: 3 Votes

It's awesome to see so many American companies on the list! People can say what they want about the current state of America but we've churned out some awesome stuff.


Given the meaning of this list, then you must mean that American companies have been able to insert themselves everywhere awesomely. As a true infection, yeah.
Rating: 2 Votes