iPhone 6s First Impressions: Touch ID is Super Fast, Live Photos Are a Gimmick and Rose Gold is Not Too Pink

We're well into the iPhone 6s and 6s Plus launch day, which means people all over the world are receiving their devices either via delivery or from Apple retail locations. On the MacRumors forums, customers who have an iPhone in hand have started sharing their first impressions of the device, giving us a look at release reactions from the general public.

We're highlighting some interesting tidbits and thoughts on the iPhones below, and we'll link to a number of forum threads that are well worth checking out. 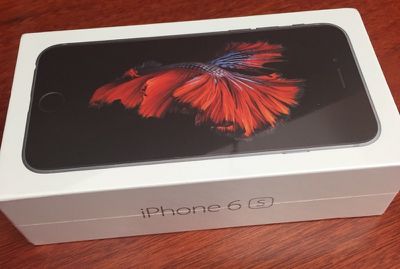 Image via SmoveAL01
Initial reactions from customers receiving their devices are similar to the thoughts we saw in the first reviews. Customers are liking the new flagship feature, 3D Touch, and say Touch ID is a whole lot faster than it was on the iPhone 6. Some even think it's too fast. From MacRumors forum member Conan86:

Touch ID is so fast that just tapping the Home Button to access shortcuts such as the Control Center or Swipe up for Camera would just unlock the device.

Image via tgwaste
A lot of new iPhone 6s and 6s Plus owners are unimpressed with Live Photos, and several have called the feature a "gimmick." The new always on "Hey Siri" feature works great according to AppleRobert, PedCrossing says the Taptic Engine "feels fantastic" and "makes much less noise," and JD2015 says the iPhone 6s Plus is "noticeably faster" than the iPhone 6 Plus. From forum member yep-sure:

Live Photos are a terrible gimmick. I just don't understand the point. If you want a photo, you take a photo, if you want video, you shoot some video. All recent iPhones do this very well. Live Photo looks like a great high quality image, then it goes to a lower quality, choppy/low frame rate video for a few seconds. This is a feature that I would turn off immediately/never use.

Image via Bako-MacAddict
Of course, there's still debate over its color, with reader asleep calling saying "It's 'no doubt about it' pink in daylight." From forum member Nazifur:

I don't know what all these people were talking about earlier.
The rose gold colour is veryyy nice.

It's definitely not that light pink pink... it has a copper look when you hold it in certain angle.

Over all it's diffidently a mix of gold and pink which looks awesome.

iPhone 6s Plus in a Seidio Surface Case via Wangta
A full list of the threads cited above is included below, along with some additional threads that include interesting information on the two new devices.

AbyssImpact
Still waiting for the UPS guy to come... :(
Score: 8 Votes (Like | Disagree)

Sonmi451
Touch ID being fast is a fact. Live Photos being a gimmick is an opinion. Maybe it is maybe it isn't, but can we hold off on these headlines for a few days?
Score: 6 Votes (Like | Disagree)

Megakazbek
I think live photos are awesome, but you will not realize it now. You will realize it 10 years from now, when you're looking at your young photos and then force touch them and boom! the moment is alive! You can basically live through old memories again.

People are trying to overuse this feature, they try posing and moving specifically for live photos, etc. This is completely wrong. You just take photos like always and that's it. You don't even need to think about them as "live" or not. And when at some point in the future you watch through them, they bring back memories in a much better way.
Score: 5 Votes (Like | Disagree)

JayLenochiniMac
Good to see that worried male members won't have their manhood fall off after all.
Score: 5 Votes (Like | Disagree)
Read All Comments

Wednesday August 17, 2022 9:51 am PDT by Juli Clover
Apple is aiming to hold its first fall event on Wednesday, September 7, reports Bloomberg's Mark Gurman. The event will focus on the iPhone 14 models and the Apple Watch Series 8. The standard iPhone 14 models are expected to get few changes, but the iPhone 14 Pro models will include updated camera technology, the removal of the notch in favor of a pill-shaped and hole-punch cutout, an A16...
Read Full Article • 156 comments