Sunday September 29, 2013 11:38 pm PDT by Richard Padilla
According to a report from identity and brand consulting company Interbrand, Apple has overtaken Coca-Cola as the new most valuable brand in the world, knocking the beverage corporation from its 13-year tenure in the annual “Best Global Brands” survey, reports The New York Times. 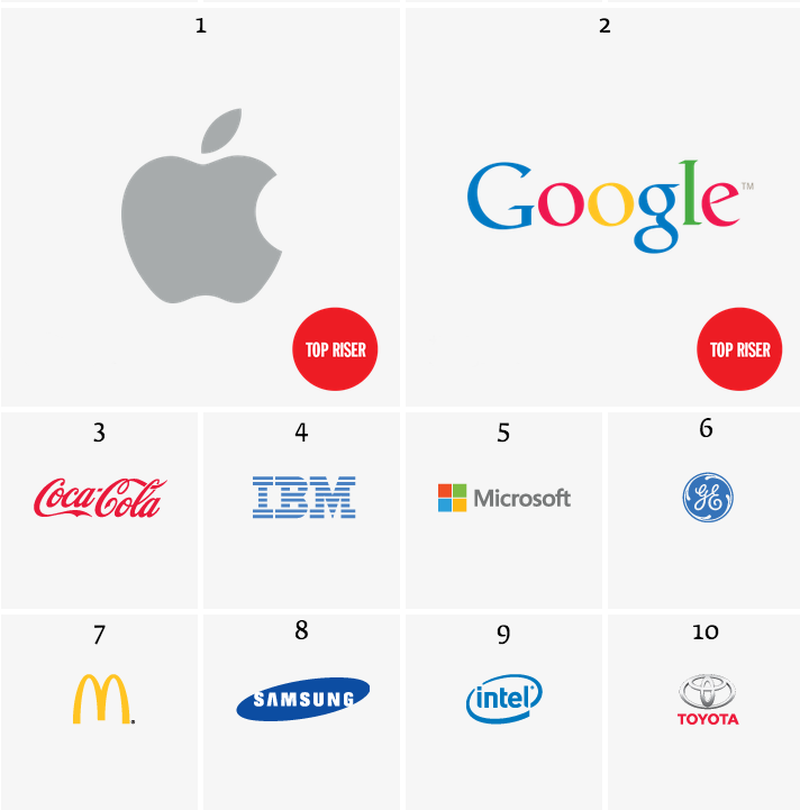 Every so often, a company changes our lives, not just with its products, but also with its ethos. This is why, following Coca-Cola’s 13-year run at the top of Best Global Brands, Interbrand has a new #1—Apple. Few brands have enabled so many people to do so much so easily, which is why Apple has legions of adoring fans, as evidenced by the record-breaking launch of the iPhone 5c/5s. For revolutionizing the way we work, play, and communicate—and for mastering the ability to surprise and delight—Apple has set a high bar for aesthetics, simplicity, and ease of use that all other tech brands are now expected to match, and that Apple itself is expected to continually exceed.

From our perspective, Apple’s internal brand strength has remained steady. CEO Tim Cook has assembled a solid team that is aligned around the Apple vision, which has allowed them to deliver against the promise time and time again. There’s been a lot of change at the top in the last 12 months, but the alignment of both hardware and software design under Jonathan Ive is a major step toward maintaining focus. A shrewd move, perhaps, given the stiffer than ever competition over the last 12 months: Samsung is now the world’s most profitable smartphone manufacturer, Google has expanded Android and its maps still seem to be the “preferred” route, and Windows Phone 8 certainly raised more than a few eyebrows.

The survey, which has been done since 2000, saw Apple come in at the second most valuable brand in the world in 2011, ahead of technology companies such as IBM, Google, and Microsoft. This year, Apple bested Google who is now the current runner-up to the most valuable brand in the world, and is also ahead of rival Samsung, which moved up to #8 from #9 in last year's survey.

Apple has made significant updates to much of its product line this year, including the recently released iPhone 5s and iPhone 5c, with the company announcing that it sold a record 9 million iPhones during the products’ launch weekend. The company also claimed that 200 million iOS devices are running the new iOS 7 mobile operating system, making it the fastest software upgrade in history.

The brand everyone knows but knows nothing about, not sure how they manage this :confused:
Rating: 27 Votes

chriscrk
But... I thought Apple was doomed? :confused:
Rating: 18 Votes

But... I thought Apple was doomed? :confused:

Has the Apple Lost Its Shine?

Apple #1 Brand - But Will It Improve Lackluster Sales?

Nothing like fiction when it comes to media and trolls. I see someone's already here trolling about the iPhone 5s' major hardware advances which must "not count" for some unknown reason :D

And trolling about Interbrand without any facts on the company. Hey, fiction's better anyway!

Like the analysts who predicted 5 million opening sales of the new iPhones, and when Apple nearly doubled that, they weren't wrong... Apple was! Somehow...
Rating: 16 Votes

inscrewtable
Who would ever have thought that Apple, the company that has single handedly changed the way humanity interacts with computers would ever beat a company that makes sugared water. I'm impressed.
Rating: 12 Votes

Pyrrhic Victory
LOL at calling the iPhone 5S a "significant upgrade". There's a reason it's not called the iPhone 6.

And who the hell is "Interbrand" to declare how valuable a brand is? I could have made this list too; their methodology is completely subjective and I have a bridge to sell to anyone who thinks that brand value can actually be quantified in dollars. This is either a total publicity stunt to troll the fanboys, or Apple and other companies paid them to get higher on the list. Either way, it's a sham that doesn't deserve one second of anyone's attention.
Rating: 12 Votes

You mean like how the 5c is called that because it has the 5's body? Oh wait...maybe it's because it's a fake upgrade that's not really an upgrade?

Yes, maybe you should start a new thread, so that people stop trolling up this one with implicit personal attacks.

You seem rather on edge.

Anyone who comes off as aggressive as you do deserves all the backlash he gets.

Your opinion is not fact. If you don't like to be heckled then be nicer and more respectful with your judgements.
Rating: 10 Votes

But haven't we heard this before already?
Rating: 8 Votes

I could care less


You COULD care less? So you do care a bit then?

I think you meant to write "I couldn't care less". Thats the one that makes sense.

You want to know what I call innovation? How about this? (//www.youtube.com/watch?v=GlpftPSuXe4). And don't tell me "OH SURFACE THO!" There STILL is NOTHING like this product today.


You call concept ideas that were never made "innovation" - wow, amazing. If you hadn't noticed Apple never make concept videos or release ideas of projects they might do and then never make. But if you want to Youtube peoples ideas on Apple you can see iPhones that project onto the wall and floating holograms, innovation huh? (on another note that Microsoft courier concept was an awful idea, hence never making it to the market - you're an idiot).
Rating: 5 Votes

ellsworth
I would rather see Apple on top of Google any day of the week.
Rating: 5 Votes

9000
Google shouldn't be that high. People use it because Bing and Yahoo! suck and because Google's search is awesome, not because they like the brand. Similarly, Toyota ought to be up there ;)
Rating: 5 Votes