As it has done for the past three years, Apple is once again recognizing December 1 as World AIDS Day at its retail locations by coloring their Apple logos red for the occasion. Several Apple Stores in the United States and the United Kingdom are expected to change the color of their logos, with images from Twitter showing that the company's store in Sydney, Australia has already adjusted its logo. 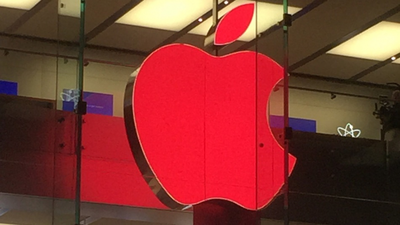 Last week, Apple announced a new campaign for World AIDS Day 2014 done in collaboration with (Product) RED which saw the launch of a special Apps for (RED) section in the App Store and a donation initiative. The Apps for (RED) section is active until December 7 and contains 25 well known apps with the proceeds benefiting the Global Fund to fight AIDS. All of Apple's customers who purchased a select Apple product on Friday, November 28 received a special (RED) iTunes gift card, and during December 1, Apple will donate a portion of every sale at its retail and online stores to the Global Fund to fight AIDS.

NY Guitarist
Kudos to Apple for giving back.

On another note. I find it sad that a serious global health issue is considered a controversial socio-political topic, and is subject to stricter moderation on this forum.
Score: 18 Votes (Like | Disagree)

.Andy
Nice one Apple. Already HIV has become a chronic illness rather than rapidly fatal. More awareness and money to research is fantastic to keep forging forward. Thumbs up.
Score: 13 Votes (Like | Disagree)

brinary001
I can't believe this had to be put in PRSI just because some people still draw a dotted line between this disease and one's sexual preference. Happy almost 2015 everyone...
Score: 9 Votes (Like | Disagree)

While the donation percentage is probably low, kudos to them.

Pretty lame that there are no Cyber Monday deals though...


Yes... because you saving a few bucks on an iPad is much more important than trying to cure a deadly disease....
Score: 9 Votes (Like | Disagree)

I can't believe this had to be put in PRSI just because some people still draw a dotted line between this disease and one's sexual preference. Happy almost 2015 everyone...

I was just about to post the same thing. Pathetic MacRumors, just like when you put Tim Cook coming out thread in here. In doing so, you're part of the problem.
Score: 7 Votes (Like | Disagree)

I was just about to post the same thing. Pathetic MacRumors, just like when you put Tim Cook coming out thread in here. In doing so, you're part of the problem.

Exactly. Put it in the main thread, have moderators delete the douche bags with asinine comments, and let's try to move forward.
Score: 6 Votes (Like | Disagree)
Read All Comments