Apple, not known for its partnerships with third-parties, is once again recognizing December 1st as World AIDS Day at Apple Retail Stores and on its website. Apple has also done something similar for the past two years. 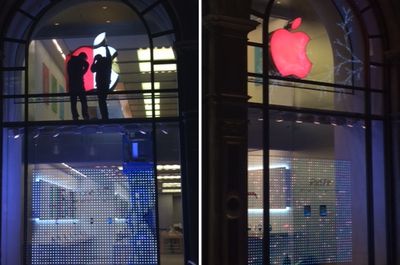 Some stores, including several locations in the United Kingdom and the United States, are expected to color their Apple logos red for the occasion. A MacRumors reader sent in two images from the Regent Street store in London noting that the coloring process has already taken place in preparation for the store's opening today, as it is already December 1st in the UK.

Every day, 900 babies are born with HIV. (RED) works with companies like Apple to fight for an AIDS‑free generation by creating (PRODUCT)RED merchandise. A percentage of gross profits from the sale of those products goes to the Global Fund to help fund AIDS programmes in Africa. Since its introduction, (PRODUCT)RED has generated more than $215 million for the Global Fund — more than $65 million from Apple alone. You can help make an impact by purchasing a (PRODUCT)RED iPod or (PRODUCT)RED accessories for iPhone and iPad.

Apple sells a number of PRODUCT (RED) items where a percentage of the profits are donated to the Global Fund to fight AIDS in Africa. There are (RED) versions of the iPod shuffle, iPod nano, iPod touch, the iPad Air and iPad mini Smart Covers, the iPad Air Smart Case, the iPhone 4S Bumper, and the iPhone 5s case.

The move follows a special charity auction by Sotheby's to benefit Product (RED) last week, which involving the auctioning off of one-of-a-kind products designed by Jony Ive and Designer Marc Newson. Items included a red Mac Pro, a pair of solid gold Apple EarPods, a special edition Leica camera and a one-of-a-kind aluminum desk. In total, all of products auctioned off at the special event raised nearly $13 million.

Note: Due to the potentially controversial nature of the discussion regarding this topic, the discussion thread is located in our Politics, Religion, Social Issues forum. All forum members and site visitors are welcome to read and follow the thread, but posting is limited to forum members with at least 100 posts.

iZac
Unfortunately most passing shoppers will think this has an association with Christmas, missing the point entirely.
Score: 18 Votes (Like | Disagree)

Ignorance is bliss. My own first world problems will always trump someone else's existential life problems. Admit it, you don't want to hear about my health problems either. And it is not as if AIDS is a big unsolved problem. It is virtually impossible to become infected with HIV, if you take precautions. And when you have HIV, there is a cure that prevents AIDS and restores near normal life expectancy. There are far worse diseases to have.


What a terrible amount of nonsense.

Many people do not have the means or knowledge to avoid HIV let alone pay the medicines to treat HIV in avoiding AIDS.

A good friend of mine is HIV positive, and even though it's a matter of only one capsule a day, it is no picnic. Both from a health and a social point of view.

There are indeed far worse diseases to have, but the picture you paint is indeed one based on ignorance. Maybe you should shut up if you don't know what you are talking about.
Score: 14 Votes (Like | Disagree)

AIDS? Ain't nobody got time for that!


Exactly, I choose to ignore AIDS. Because mankind already has all the means it needs to defeat HIV permanently. The virus can be detected and further infections can be prevented.


You know nothing about the molecular biologic properties of HIV apparently.

This epidemic is easily manageable if properly addressed. Those African countries who tackle the problem have already reached a 90% reduction in new infections. AIDS is almost gone.


It isn't, infections are increasing in certain areas in developed countries. But you wouldn't know that.


Now go raise awareness for poverty. Because without poverty the outbreak wouldn't even have started to spread.


Get your head out of your *ss. HIV is not only a poverty problem, and before you even start. Not all infections in developed countries are preventable because they stem from unprotected sex or drug use.

And to point out the obvious: Buying a different color case from the richest technology company in the world, doesn't help with poverty at all.


Next to HIV you also don't know anything about marketing. The RED campaign is not intended to make people buy specifically products to support HIV R&D etc. The point of RED is to piggy back on planned purchases and to let producers and retailers donate part of the proceeds on those specific products to the campaign. Those proceeds DO HELP.

There is nothing for me to do, except pretending that I care for someone I don't know.


I sincerely hope that at some point you will come in a situation where you need help or support from someone you don't know. What if you had a car accident and no-one bothered to call 112, or what if you became unemployed, or critically ill? I'm sure you will at that point value what others have anonymously donated or paid as taxes to help your cause. Too bad there isn't a cure for stupidity because you are in great need of one.
Score: 7 Votes (Like | Disagree)

It's not worth it I don't think.It was so hard to go in and out of the store oh 5th avenue tonight.Thats just me though,


Poor you. Never mind though - could be worse. You could have AIDS.
Score: 6 Votes (Like | Disagree)

There's been a plague of low-information posts in the recent (RED) threads, and your latest is one of the worst. Ignorance is not a state of bliss.

Ask Bill Gates why he contributes only $28b of his wealth to charity and keeps $73b for himself personally.

Still further, Bill and Melinda Gates and Warren Buffet are the originators of The Giving Pledge (http://en.wikipedia.org/wiki/The_Giving_Pledge), a campaign to encourage billionaires to leave most of their wealth to philanthropic causes. As of July of this year, over 113 billionaires have signed this pledge. Not only is your claim about Bill Gates false, but Gates has helped to spearhead over 100 billionaires to give away the majority of their fortunes. Nobody in our civilization has ever had a greater impact on the philanthropic contributions of the wealthy than those three individuals.

You're welcome to have whatever attitudes you want about the wealthy, but you must make sure that the facts actually agree with your attitudes. Do not make false statements here. Do your homework first. Thanks!

But to most of the MR regulars that will still not be enough as he is the devil on earth.

I completely disagree. Bill and Melinda have given away more than enough.
Score: 4 Votes (Like | Disagree)
Read All Comments