As part of its campaign announced late yesterday to support the upcoming World AIDS Day, Apple has also confirmed its annual Black Friday sale on November 28, which is branded this year as the (RED) Special Shopping Day Promo. 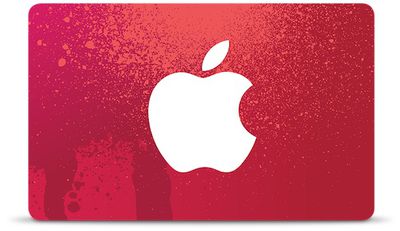 The U.S. promotion is offering (RED) gift cards to customers who purchase a qualifying product on Black Friday. Unlike last year, Apple is including the iPhone in the (RED) promotion this year, offering a $50 gift card for iPhone 6, iPhone 6 Plus, iPhone 5s, and iPhone 5c purchases except for those made with no money down through the online store.

Gift card amounts for other products vary and include $100 on select Macs, $50 on qualifying iPads, and $25 each on qualifying Apple TV, iPods, and Beats hardware. Some of these amounts are lower than last year's Black Friday sale, which provided $150 gift cards for Mac hardware, $75 for the iPad Air and $50 on iPods. This year's sale includes the following hardware and gift card values:

The (RED) Special Shopping Day Promo begins on November 28 and lasts for one day or while supplies last. This Black Friday sale is part of Apple's recently announced World AIDS Day campaign, and in addition to the gift cards for customers on Friday, Apple will also donate a portion of its retail and online sales from Black Friday, November 28 and Monday, December 1 to the Global Fund to fight AIDS.

LucasLand
these are only iTunes gift cards, not Apple store cards. gift cards can only be used for iTunes or their app stores.

"Subject to Gift Card Quantity Limits, those who purchase a Qualifying Product on November 28, 2014, may receive a (RED)® iTunes Gift Card in the amount below that can be used at the U.S. iTunes Store, Mac App Store, App Store, and iBooks Store"

dorsal
No Mac Pro discount?
Surely there is a little margin they could spare.
Score: 6 Votes (Like | Disagree)

These seem in line with the traditional holiday offers. Tis the season to buy Apple with as close to a discount as you're going to get.

How is it lame? They're giving you something for free that they don't have to give you at all. It's Apple. they don't NEED to discount anything to sell it.


So are you saying that they don't NEED the sales numbers from Walmart, Best Buy, Target, and ToysRUS that are discounting these products heavily?

This isn't 2010. Apple used to be strict with 3rd party pricing. Now they aren't. They want sales.... So don't get mad at people for asking Apple 1 day out of the year to discount their own site.
Score: 3 Votes (Like | Disagree)

these are only iTunes gift cards, not Apple store cards. gift cards can only be used for iTunes or their app stores.

"Subject to Gift Card Quantity Limits, those who purchase a Qualifying Product on November 28, 2014, may receive a (RED)® iTunes Gift Card in the amount below that can be used at the U.S. iTunes Store, Mac App Store, App Store, and iBooks Store"


How is it lame? They're giving you something for free that they don't have to give you at all. It's Apple. they don't NEED to discount anything to sell it.
Score: 3 Votes (Like | Disagree)

I would have expected at least $150 if one buys a retina 27" iMac IF NOT MORE. Especially when its almost 3x the price of an AIR which also gets $100

I just missed a deal here in Toronto last week that was selling them for $250 less
:(


Wonders if this US deal is going to be the same for Canada....

And I'm sure if they were offering $150 you'd post here saying they should've offered $200....etc, etc, etc. If getting the best deal in the world is what it takes for you to buy then you didn't want the product in the first place.
Score: 3 Votes (Like | Disagree)
Read All Comments