Back in early July, Samsung launched a new Galaxy S5 ad calling iPhone users "Wall Huggers" and mocking the iPhone for having a short battery life while touting the battery-saving capabilities of its own newest flagship phone.

In addition to highlighting the Galaxy S5's Ultra Power Saving Mode, the ads include the words "So you have the power to be anywhere but here," possibly poking fun at Apple's own recent line of app-focused advertising, which revolves around the tagline "You're more powerful than you think." 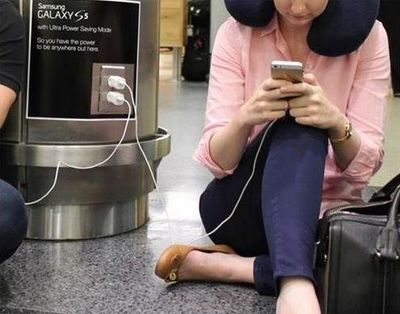 First introduced in February, Samsung's 5.1-inch Galaxy S5 includes a fingerprint sensor, a water resistant casing, and a heart rate sensor, along with one of its most highly touted features, the Ultra Power Saving Mode. This mode activates a black and white display with limited app access when the phone's battery is low, cutting off LTE and disabling WiFi/Bluetooth to provide up to an additional 24 hours of standby time with less than 10 percent of battery left.

While Apple does not have a similar power saving feature on the iPhone, it does provide users with quick access to settings like WiFi and Bluetooth, plus options to disable battery draining features like background app usage and location services. Apple's newest operating system, iOS 8, also includes battery saving functions like Battery Usage, which lets users keep an eye on apps that are draining too much power.

Many people are hoping Apple's upcoming iPhone 6 will introduce better battery life, but signs have pointed towards only modest battery gains thus far. Various rumors suggest the 4.7-inch iPhone 6 could get a battery between 1,800 and 2,100 mAh, a moderate improvement over 1,560 mAh battery in the iPhone 5s.

Update: MacRumors reader Harrison Weinerman has sent in a much clearer image of Samsung's new outlet ad taken in Terminal C at the Newark airport in New Jersey on August 10.

scaredpoet
If they are truly confident that their users don't need wall outlets, then they should turn words into action and remove all of these: 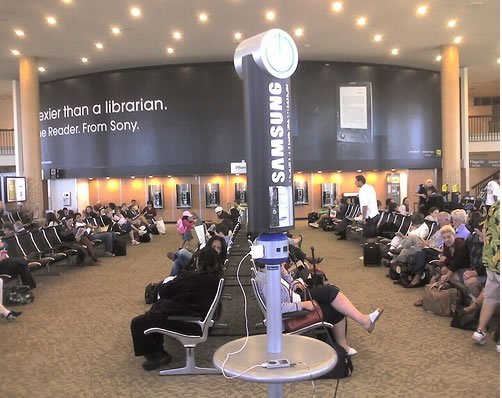 Why pay for something that only your competitor needs?
Score: 79 Votes (Like | Disagree)

Planey28
Still find it pretty funny how Samsung take to attacking Apple's users, their potential customers, rather than Apple themselves. So smooth.
Score: 54 Votes (Like | Disagree)

roow110
Not that I like these samsung adverts one bit, but thats actually pretty clever.
Score: 51 Votes (Like | Disagree)

Only Samsung could take their biggest overall weakness -- power hungry huge screen phones with short battery life -- and try to make it seem like a strength. Their marketing people are bold!

Just got back from a trip and did an informal wall-hugger poll: I noticed 4 people with Samsung phones, and 0 iPhones. One Samsung user had his phone plugged into the wall, but he was happily typing away on his iPad.
Score: 35 Votes (Like | Disagree)

SVTmaniac
I love watching all you get your panties in a bunch over this stuff. I hope I'm never so narrow minded that I cling to one brand. Samsung and pretty much every Android phone has the iPhone beat in battery life, maybe not in battery efficiency, but definitely in overall battery life.
Yes if Apple were to put a 3,000mah battery in an iPhone with the same current optimizations it would likely beat an Android phone, but they don't and that's the problem.
Score: 28 Votes (Like | Disagree)
Read All Comments

Sunday September 25, 2022 6:50 am PDT by Sami Fathi
Apple could decide to release its remaining products for 2022, which includes an updated iPad Pro, Mac mini, and 14-inch and 16-inch MacBook Pros, through a press release on its website rather than a digital event, according to Bloomberg's Mark Gurman. In his latest Power On newsletter, Gurman said that Apple is currently "likely to release its remaining 2022 products via press releases,...
Read Full Article • 128 comments