iOS 8 to Include Battery Usage Per App and Much More

During today's Worldwide Developers Conference keynote, Tim Cook and other Apple executives gave us a fast-paced, broad-ranging look at some of the features we can expect with iOS 8, including improvements to Messages, keyboard enhancements in the form of QuickType and access to third-party keyboards, HealthKit, Extensibility, and more.

Along with the features that were demoed on stage, an iOS 8 graphic displayed some additional functions that went largely under the radar, many of which look quite interesting. For example, iOS 8 will apparently display battery usage by app, a handy feature that will let users monitor the battery drain of specific apps, shutting down those that are drawing too much power. 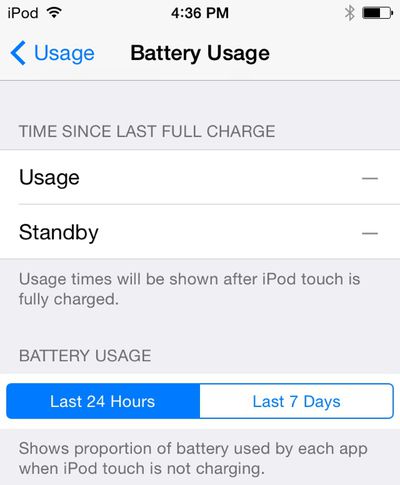 Image courtesy of Evan Coleman
iPads will gain the ability to take Panoramic photos like the iPhone, while the Camera will gain an instant burst mode, a timer mode, and separate controls for focus and exposure. iBooks will support an auto night mode and the ability to organize books by series, while notifications will include travel time.

A mysterious Tips app, which was first depicted in an early screenshot of iOS 8, is also mentioned, though it is unclear what this app will do. It is possible Tips will provide iOS users with information on lesser known iOS features, serving as a tutorial app for those who want to learn the ins and outs of their devices.

Click to make larger
An "In Case of Emergency" card will be added to iOS 8, displaying contact information and possibly health-related information as well. Users will be able to use Siri to purchase iTunes content, Notes gains a new rich text editing feature, and RSS feeds are displayed within Shared Links in Safari.

Other mentioned features offering unknown functions include Place cards in other apps and Speak Screen.

These are of course, only a small selection of the hundreds of new features and minor functions that will likely be added to iOS 8 as it is in development. iOS 8 is available to developers immediately, while the public will get access to the new mobile operating system later this year.

Another Android feature checked off... Will Apple come up with anything original any time soon??


Will Trolls say anything original any time soon?
Score: 20 Votes (Like | Disagree)

CyBeRino
Braille keyboard? This I have to see.
Score: 15 Votes (Like | Disagree)

Tha Professor
DuckDuckGo for Safari... Someone is not happy right now :-)
Score: 12 Votes (Like | Disagree)

Another Android feature checked off... Will Apple come up with anything original any time soon??

Why? You not happy with Android?
Score: 9 Votes (Like | Disagree)

These new features in iOS 8 are awesome! I like the QuickReply feature for texting. Hopefully the next keynotes will feature hardware from here on out.


Let me know when Android has as good security as iOS does.

ElTorro
Another Android feature checked off... Will Apple come up with anything original any time soon??
Score: 8 Votes (Like | Disagree)
Read All Comments