Saturday August 2, 2014 9:55 am PDT by Jordan Golson
Apple launched a new television ad in its "You're More Powerful Than You Think" campaign, this time called "Dreams". The song in the ad is "When I Grow Up" by Jennifer O'Connor.

It is the fourth ad in the series, with previous spots "Powerful", "Strength", and "Parenthood" focusing on the sheer variety of apps on the iPhone, workout apps, and apps for parents.


Like the other ads, "Dreams" shows the iPhone used in various situations in everyday life, extended with apps from the App Store. Apps and accessories featured in the spot include:

"Dreams" debuts just over a month after the previous spot, "Parenthood", was released at the end of June.

robjulo
Does it show actual business people Replying to an email and not being able to attach a file?
Rating: 14 Votes

When you are looking to buy a car, and how great the car is, let's try this.

They have a car, up on jacks, with it's engine running, hooked up to some device that's harvesting corn.


I am sorry, but it's a really stupid analogy. Smartphone is not a car. It's a multipurpose device that you always have on you. It's only natural for it to be used for a variety of purposes.

Using this device to control other things makes perfect sense. And this is what sets iPhone apart from Android phones - there is so much 3rd party hardware that supports iOS. Apple is spot on to highlight this in their ads.
Rating: 10 Votes

I really really wish they would stop, in so many of their adverts now, showing what the iPhone can do if you buy other people's hardware to add onto it.


Way to miss the point of the ad.. The idea of this campaign is to show that iOS devices can be used in a variety of situations/purposes. And in many of them - iPhone controls other hardware.

Or should their ads just show people using their iPhone to check Facebook and browse the web?

Oh and newsflash - iPhone IS a "display device that runs some software". That's what smartphone and computers generally do :rolleyes:
Rating: 10 Votes

pure-rockstar
People really do use their iDevices like this.
Rating: 8 Votes

Piggie
I really really wish they would stop, in so many of their adverts now, showing what the iPhone can do if you buy other people's hardware to add onto it.

Basically just making the phone a display device that runs some software.

Then at the end of the advert in micro writing for just 1.5 seconds on screen that "Other hardware may be required"
Rating: 8 Votes

CPx
I see the self-styled creative director brigade is out today.
Rating: 7 Votes

You can do that without 3rd party apps and going around in circles?


If hitting the "attach" button in a non-built-in app equates to "going around in circles" for you: 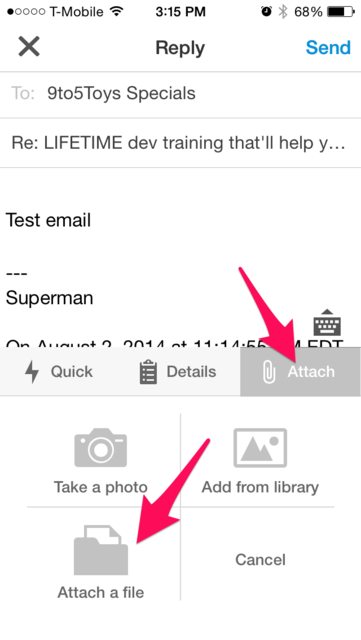 Then you'll have to lump in nearly every corporate e-mail deployment on desktops/laptops, because almost none of them use built-in e-mail clients.
Rating: 6 Votes

Mtmspa
The point of these ads are to show that the iPhone is a handheld computer that can do amazing things and not just a device to make calls and text. I am a mid west conservative and I get the point. 3 years ago did anyone think your phone would be able to do what it does today? Apple wants people to thing of the possibilities, not the features that other devices have or don't have.
Rating: 6 Votes

You really want a fire officer checking his iPhone, or a vet come to check out you horse by holding an iPhone against it?

Next will be an operating theater, no expensive professional equipment, just a few iPhones with some cheap addons plugged into them whilst you are having your heart bypass operation. :D
Rating: 6 Votes

ouimetnick
Once again, this ad only applies to the six people using Apps like this. For the mass, this is not a very effective way to sell a product. That ad didn't convince me to buy an iPhone. Its an ad I wouldn't waste my time watching.

Why not make an ad that focuses on the product that is being sold, and what makes the product great, unique features, and how it is a good fit. I almost like the Scamscum advertisements for this reasons. They highlight the pros of their product. Not that I would ever buy a Scamscum product though. It still doesn't compare to iPhone.

On the bright side, the music was a good choice, and it did show six (although rare) instances where the iPhone comes into use that fit right into these six people's life style. Again, not sure that the millions of iPhone owners actually care though.
Rating: 6 Votes