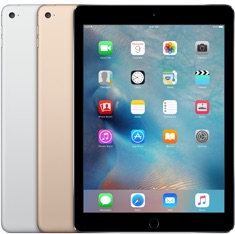 Apple's original iPad Air was impressively thin, measuring in at just 7.5mm, similar to the pencil that it was compared to in an array of advertisements. On October 16, 2014, Apple introduced the iPad Air 2, which is significantly thinner at just 6.1mm thick.

Aside from its thinner body, the iPad Air 2 retains the same general design elements of the original iPad Air, but it has gained some impressive under-the-hood improvements. For one, the tablet now comes with the Touch ID fingerprint sensor first introduced in the iPhone 5s, and it also includes an upgraded A8X processor that's faster than the A8 in the iPhone 6 and 6 Plus, and 2GB of RAM. There's an M8 motion coprocessor as well, which pulls in data from the accelerometer, gyroscope, compass, and a new barometer.

Using a laminated gapless display let Apple shed bulk from the iPad Air 2 while also improving its screen, offering enhanced contrast and more vibrant colors. Apple also added an anti-reflective screen coating that cuts down on up to 56 percent of glare.

The iPad Air 2 has gained an 8-megapixel rear camera that includes an Apple-designed image signal processor, an f/2.4 aperture, and support for 1080p HD video. For the first time, the iPad can capture large panoramas of up to 43 megapixels, it can capture 720p 120FPS Slo-mo video, it has time-lapse video capabilities, and it can take burst mode photos.

With 802.11ac Wi-Fi, the iPad Air 2 offers speeds up to 2.8 times faster than the original iPad Air and like the iPhone 6 and 6 Plus, the iPad Air 2 supports LTE Advanced for faster LTE speeds. It also integrates more LTE bands than ever before for improved connectivity around the world.

As of March 2016, the iPad Air 2 has been replaced by the 9.7-inch iPad Pro. The iPad Pro is Apple's newest tablet, and the iPad Air 2 is not likely to see additional refreshes. Apple has kept the iPad Air 2 in its lineup as a more affordable option, and it remains a highly capable tablet even though it is now two years old.

While the iPad Air 2 has the same 2048 x 1536 9.7-inch Retina display found in the original iPad Air, it uses a "gapless" production technique that combines three layers (cover glass, touch sensor, and LCD) into one. According to Apple, this new fully laminated display results in both "more vivid colors and greater contrast" an improvement that was also cited in multiple iPad Air 2 reviews.

Apple also says that the laminated display of the iPad Air 2 brings the LCD layer closer to the user's eyes, so when the screen is touched, it feels as if content is being touched. The touch sensor also has improved sensitivity, tracking a finger on the screen more accurately.

The iPad Air 2 has an anti-reflective coating that Apple says is "custom-designed" to reduce glare by up to 56 percent making the display more readable outdoors. A recent test from DisplayMate's Ray Soneira found that the anti-reflective coating on the cover glass reduces ambient light reflections by about three to one over most other tablets and smartphones.

The iPad Air 2 includes an A8X processor, an upgraded version of the A8 processor found in the iPhone 6 and 6 Plus. According to Apple, the A8X processor delivers 40 percent faster CPU performance than the A7 chip in the previous iPad Air and 2.5 times the graphics performance.

Benchmarks have suggested the A8X is a triple-core processor clocked at 1.5 GHz, which brings impressive speed improvements compared to the A8 processor found in the iPhone 6 and the A7 in the first iPad Air.

Apple does not reveal the RAM in its iOS devices, but part leaks ahead of the iPad Air 2's release suggested the tablet would be the first of Apple's mobile devices to offer 2GB of RAM.

Early reviews confirmed the inclusion of 2GB of RAM in the iPad Air 2, as did benchmarks. An iFixit teardown revealed that the iPad Air 2 has two separate 1GB Elpida RAM chips located on either side of the A8X processor.

Due to its thinner design, the iPad Air 2 includes a smaller battery than the battery that was found in the original iPad Air. At 27.62 Whr and 7,340 mAh, the tablet sacrifices a bit of power for a smaller form factor. The first-generation iPad Air had a 8,827 mAh/32.9 Whr battery life.

Despite the iPad Air 2's smaller battery, it continues to get the same 10 hours of battery life that have been advertised in the last several iPads. Apple says that the new tablet is more power efficient than previous versions, allowing the smaller battery to provide just as much power. Reviews, however, suggest that the iPad Air 2's battery does not last quite as long as the iPad Air's battery when performing the same tasks.

The iPad Air 2 includes an NFC Controller, according to teardowns of the tablets. The tablet does not contain NFC antennas to allow them to make NFC-based payments within stores, but the included NFC Controller chip is where Apple Pay's "Secure Element" is located. According to Apple, the Secure Element is a dedicated chip that stores encrypted Device Account Numbers, which replace credit card numbers for security reasons.

Though the iPad Air 2 is not able to make payments in retail stores, it can be used to make Apple Pay payments within participating apps and on the web, thus utilizing both the Secure Element and Device Account Numbers.

The iPad Air 2 comes equipped with a Touch ID fingerprint sensor, adding an additional layer of protection to the tablet and enabling it to make Apple Pay payments within apps.

The iPad Air 2 has an 8-megapixel camera, which is similar to the 8-megapixel camera in the iPhone 6 and 6 Plus. It includes an advanced image signal processor that offers improved face detection, faster focusing, and better noise reduction.

With the 8-megapixel camera, the iPad Air 2 is capable of capturing 1080p HD videos, and it also supports both 120 FPS Slo-Mo videos, high-resolution panoramas, and Burst Mode photos.

A 1.2-megapixel FaceTime HD camera has also been included in the iPad Air 2, with an improved sensor and a larger f/2.2 aperture that lets in 81 percent more light. The camera can capture 720p HD video.

Like the previous-generation iPad Air, the iPad Air 2 contains a motion coprocessor with a gyroscope, accelerometer, GPS, and compass functionality. The new version also includes a barometer, to measure altitude based on air pressure.

Cellular + Wi-Fi models support LTE Advanced, using carrier aggregation to offer LTE connection speeds of up to 150 Mbps. Like the iPhone 6 and 6 Plus, the iPad Air 2 also includes support for up to 20 LTE bands, allowing the iPad Air 2 to connect to high-speed LTE networks in more locations across the world.

Apple also introduced a new Apple SIM for Wi-Fi + Cellular models of the iPad Air 2, giving users the freedom to move between AT&T, T-Mobile, and Sprint at will, taking advantage of a variety of short-term plans in the U.S. and UK. Verizon is a participating carrier, which means Verizon customers must visit Verizon stores to activate cellular service on their devices.

Apple SIM cellular data plans were initially only available in the United States and United Kingdom, but in June of 2015, data access became available in more than 90 countries through a partnership with GigSky.

In the fall of 2015, the iPad Air 2 received a quiet over-the-air update to its Bluetooth firmware, upgrading it to Bluetooth 4.2. It originally shipped with Bluetooth 4.0.

The iPad Air 2 can be purchased from Apple's online store or from Apple retail stores in many countries across the world. Having been available since 2014, the tablet is widely available and orders ship out immediately.