New details have come to light regarding the iPad Air 2's graphics processing power since its launch last month, with a new report from AnandTech revealing the new tablet's graphics are even more powerful than previously thought.

Benchmarks and teardowns on the tablet revealed details on the inner workings of the iPad Air 2 in the days following its launch, but a new image of the A8X die provided to AnandTech reveals the layout of the Apple-designed chip. The die photo shows the A8X includes eight-core graphics, even larger than the 6-core GX6650 graphics from Imagination Technologies previously assumed to be in the chip.

To get right down to business then, the die shot confirms what we had begun suspecting: that A8X has an 8 cluster Series6XT configuration. All 8 GPU clusters are clearly visible, and perhaps unsurprisingly it looks a lot like the GPU layout of the GX6450. To put it in words, imagine A8’s GX6450 with another GX6450 placed right above it, and that would be the A8X’s 8 cluster GPU.

AnandTech was unable to share the source's actual image of the die, but Chipworks has just provided MacRumors with a similar image showing the eight graphics cores taking up a substantial portion of the A8X's die. The photo also shows the new triple-core CPU and a number of other features included on the chip. 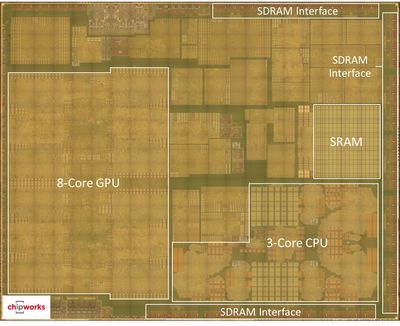 A8X die photo from Chipworks
Uncertainty over the A8X graphics stems from Imagination's public list of Series6XT graphics offerings, which tops out with the 6-core GX6650, but the new die photo reveals that Apple has employed a semi-custom design essentially pairing two quad-core packages on the chip to yield eight-core graphics.

Thanks to its licensing agreements with Imagination, Apple is free to modify the GPU designs developed by the graphics company, and Apple's position as a key investor in Imagination almost certainly gives it advance access to Imagination's pipeline, allowing such custom designs to be launched just nine months after Series6XT was announced.

Other gathered information includes details about the A8X's size and design. The die shot places the A8X at roughly 128mm2, only a bit larger than the 123 mm2 A6X used the last time Apple developed a custom "X" chip for the iPad. Compared to other models on the market, the A8X is a bit larger than NVIDIA’s 118mm2 GK107 GPU but also smaller than Intel’s 130mm2 2C+GT2 Haswell CPU. Design-wise, the A8X otherwise appears to have not drastically changed much from the A8, besides slight tweaks to make the eight-cluster design functional and the addition of a third CPU core.

Just yesterday, Imagination announced its next-generation Series7XT designs, and given the timing of this year's announcements and releases, the new graphics are likely to make their way into Apple's A9-series chips for inclusion in its 2015 iOS devices.

dannys1
Can't innovate my ass (or do tech specs not count when Apple does them?)
Score: 23 Votes (Like | Disagree)

MartinAppleGuy
Why did Apple ever make the quote "most forward thinking Iphone" for the iPhone 5s but no mention anything for this? 2GB of RAM, a tri core CPU pretty much on par with the MacBook air, 8 cluster graphics... The iPad Air 2 is Apples most forward thinking iOS device and it will have the largest longevity of any iOS device created to date.
Score: 11 Votes (Like | Disagree)

Rogifan
We know Apple can kill it with hardware. It's software where they need to step up.
Score: 8 Votes (Like | Disagree)

On my iPad Air 2, both Monopoly and Battleship have their graphics messed up. While the power and speed are great, it would be nice if EA and Hasbro fixed them.


Just put a hotel on Boardwalk. Maybe it will fix the problems
Score: 7 Votes (Like | Disagree)
Read All Comments