Now that the iPad Air 2 is being delivered to customers and showing up in retail Apple Stores, iFixit has acquired one of the new tablets and has begun one of its traditional teardowns to see just what's inside Apple's thinner, more powerful iPad Air 2.

According to iFixit, the "gapless" front panel is more rigid than previous iPad models, and feels sturdier when it's being pried up with the company's proprietary iOpener. As with all iPads, the glued down display is the only access point to the tablet. 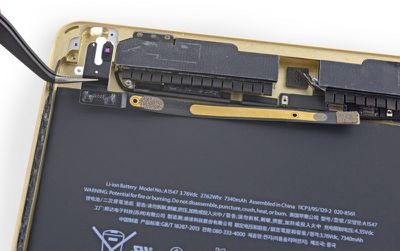 iFixit's teardown confirms the existence of both the more powerful A8X processor and 2GB of Elpida F8164A3MD RAM, with two separate 1GB RAM chips located on either side of the A8X processor. Based on Elpida's RAM numbering scheme, the "8" located in the second character slot indicates that each chip is 1GB. 2GB on a single chip would be denoted with an "A".

The tablet also has 16GB of flash memory from SK Hynix and the same NXP 65V10 NFC module that was used in the iPhone 6 and 6 Plus, but it does not appear to have an NFC antenna. Apple has said that the iPad Air 2 and iPad mini 3 will not be able to make in-store Apple Pay payments.

The iPad Air 2's Touch ID sensor cable appears to be very similar to the sensor cable found in the new iPhones, and the Touch ID sensor itself was made by NXP Semiconductors. The 8-megapixel camera is similar to the camera in the iPhone 6 and 6 Plus as well, but they are not identical. The iPad Air 2's ambient light sensor has been split into two sensors, with one now located on the headphone jack, possibly for improved accuracy.

Along with the repositioning of several internal microphone and camera components, the Wi-Fi model's antennas, previously located at the bottom of the tablet, have been moved to the top of the iPad. iFixit has also confirmed that Smart Covers designed for the previous-generation iPad Air will work with the iPad Air 2.

Apple's iPad Air 2 is currently available for order online, with new orders shipping in two to four days. Wi-Fi only models are also available in retail stores as of today, with Wi-Fi + Cellular models coming at a later date. Prices for the new iPad Air 2 start at $499.

Kariya
All for thinness that matters little. Bet many would've gladly take the previous gen's depth + the bigger battery.
Score: 78 Votes (Like | Disagree)

Lancetx
The battery life is still at least the 10 hours that Apple promises, but I guess some people just have to find something to complain about now that they can't complain about the lack of RAM....
Score: 70 Votes (Like | Disagree)

Supacon
If Apple's priorities weren't clear before, this spells it right out. They have no problem sacrificing battery life if it means they can make a thinner device.
Score: 58 Votes (Like | Disagree)

All for thinness that matters little. Bet many would've gladly take the previous gen's depth + the bigger battery.


Smaller battery but same battery life. If thinness makes the tablet easier to use, then yea go ahead and shrink the battery as long as it gives me the same great battery life.
Score: 47 Votes (Like | Disagree)

dc89
Apple's obsession with thinness has just got silly.
Protruding cameras in one product and a decrease in battery life in another.
Score: 45 Votes (Like | Disagree)

Smaller battery but same battery life. If thinness makes the tablet easier to use, then yea go ahead and shrink the battery as long as it gives me the same great battery life.


Reviewers have found the original Air to have better battery life in their reviews.
Score: 45 Votes (Like | Disagree)
Read All Comments