By MacRumors Staff on July 9, 2019
Jump to How Tos Guides Articles

3D Touch is an expanded multi-touch feature built into the display of the iPhone 6s and later, although it was later phased out in favor of a similar Haptic Touch feature starting with the iPhone XR. It allows the iPhone to measure different levels of pressure in addition to taps, swipes, and pinches, adding a new range of pressure-based gestures to the devices.

Similar to the right click function of a MacBook, 3D Touch opens up menus, different app options, and content previews.

A 3D Touch press on a supported app on the iPhone Home screen brings up "Quick Actions," for example, which are shortcuts, while "Peek" gestures can be used within apps like Safari, Messages, and Mail to preview content. Longer "Pop" gestures are used after "Peeks" to open content, and there are also other capabilities enabled with 3D Touch like pressure-sensitive drawing and a keyboard trackpad for quick cursor movements.

3D Touch is available in stock Apple apps and in third-party apps that have built in support using 3D Touch APIs.

Newer iPhone models mimic many aspects of 3D Touch with a Haptic Touch feature that combines a long press with haptic feedback to access 3D Touch options. There are, however, a few areas of the operating system where Haptic Touch does not replace 3D Touch functionality, as it would conflict with existing long press functionality.

How to Use Native 3D Touch Actions in iOS 10

Wednesday September 14, 2016 12:35 pm PDT by Tim Hardwick
With iOS 10, Apple has focused on expanding 3D Touch functionality to make it more relevant to users, in the hope that they eventually come to see it as second nature. If you have an iPhone 6s or later, there are a wide range of 3D Touch gestures that you can test out in iOS 10, particularly from the home screen. Here we've compiled a list of native app icons that now support 3D Touch, as...
Read Full Article (18 comments)

How to Use 3D Touch on iPhone 6s and 6s Plus

Friday October 30, 2015 3:09 pm PDT by Lory Gil
Apple's iPhone 6s and 6s Plus has been selling strongly since its launch last month, thanks in part to a number of new features including 3D Touch. With it, users can access Quick Actions from the home screen and Peek and Pop from within a variety of stock and third-party apps. If you're wondering about what all of the hubbub is about, or want to know how to make it work better for you, we've...
Read Full Article (26 comments)

Wednesday April 18, 2018 1:37 pm PDT by Juli Clover
3D Touch is a feature that's been around since the 2015 release of the iPhone 6s, and it's become an integral gesture system on all of Apple's latest iPhones. Though it's been around for a while, there are several hidden and less obvious 3D Touch gestures that you may have forgotten or might not be aware of, especially if you don't use the feature often. In our most recent YouTube video and in ...
Read Full Article (49 comments) 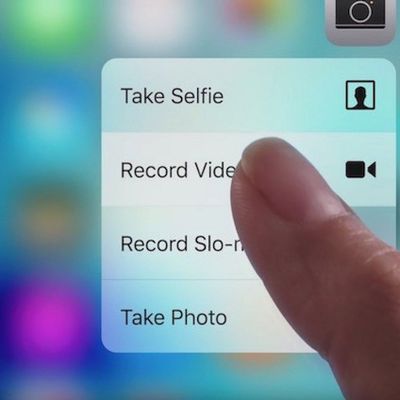 3D Touch Again Rumored to Be Removed From All 2019 iPhones

Tuesday July 9, 2019 5:45 am PDT by Joe Rossignol
A few months ago, in a research note shared with MacRumors, a team of Barclays analysts "confirmed" that 3D Touch "will be eliminated" in all 2019 iPhones, as they predicted back in August 2018. The analysts gathered this information from Apple suppliers following a recent trip to Asia. The Wall Street Journal floated the same rumor back in January, and now, yet another source suggests 3D...
Read Full Article 60 comments

Tuesday June 4, 2019 7:55 am PDT by Joe Rossignol
Earlier this month, it was reported that 3D Touch will not be supported by 2019 iPhones. This rumor was surfaced by a team of Barclays analysts after they traveled to Asia and spoke with multiple Apple suppliers, likely meaning that there is evidence of 3D Touch being removed at the hardware level. Now, on the software side, there are changes that suggest the rumor is accurate. It really...
Read Full Article 154 comments

Monday May 27, 2019 12:13 pm PDT by Joe Rossignol
Four years after 3D Touch debuted on the iPhone 6s, the pressure-sensitive feature appears to be on the chopping block. Last week, in a research note shared with MacRumors, a team of Barclays analysts "confirmed" that 3D Touch "will be eliminated" in all 2019 iPhones, as they predicted back in August 2018. The analysts gathered this information from Apple suppliers following a trip to Asia...
Read Full Article 337 comments

Tuesday October 23, 2018 9:10 am PDT by Joe Rossignol
By now, you've probably heard that the iPhone XR features a new technology called Haptic Touch instead of the usual 3D Touch. Haptic Touch is simply a marketing name for a long press combined with haptic feedback from the Taptic Engine. The feature is a substitute for 3D Touch, which Apple wasn't able to include on the iPhone XR in order to achieve a nearly edge-to-edge LCD screen, a...
Read Full Article 120 comments

Barclays: All 2019 iPhones May Lack 3D Touch, New AirPods and Lower-Priced HomePod to Launch Next Year

Monday August 27, 2018 9:06 am PDT by Joe Rossignol
Barclays analyst Blayne Curtis and his associates traveled across Asia last week to meet with companies within Apple's supply chain. Today, they shared new predictions based on the information they gathered. Highlights from their research note to investors, obtained by MacRumors: Barclays says it's "widely understood" that 3D Touch will be removed from iPhones with OLED displays in...
Read Full Article 197 comments

Wednesday June 20, 2018 8:43 am PDT by Joe Rossignol
Toshiyasu Abe, a resident of Vancouver, Washington, has filed a lawsuit against Apple in Oregon district court this week, accusing the company of infringing upon his patent with Key Flicks and 3D Touch on select iPhone and iPad models. The patent in question is No. 6,520,699, granted by the United States Patent and Trademark Office in February 2003.Mr. Abe has been an entrepreneur and...
Read Full Article 132 comments

Monday January 29, 2018 3:54 am PST by Joe Rossignol
Immersion, a company that develops and licenses haptic feedback technologies, today announced it has reached a settlement and licensing agreement with Apple. The terms of the deal are confidential. Immersion describes itself as the leading innovator of haptic feedback systems, with more than 2,600 issued or pending patents. The company, headquartered in San Jose, California, says its...
Read Full Article 11 comments

Thursday September 21, 2017 10:01 am PDT by Joe Rossignol
Apple software engineering chief Craig Federighi has revealed that a popular 3D Touch gesture for accessing the App Switcher will apparently return in a future update to iOS 11. Federighi, replying to an email from MacRumors reader Adam Zahn, said Apple had to "temporarily drop support" for the gesture due to an unidentified "technical constraint." Question from Zahn: Could we at least make...
Read Full Article 207 comments

Friday May 19, 2017 4:42 am PDT by Tim Hardwick
A new report on Friday added support to the claim that Apple is facing higher component costs for this year's highly anticipated OLED iPhone, which some analysts believe will carry a "premium" price tag compared to previous models. The 3D Touch module in the redesigned handset will cost 150 percent more than the equivalent parts in LCD-based iPhones, according to the Chinese-language Economic...
Read Full Article 92 comments

Tuesday June 28, 2016 6:37 am PDT by Mitchel Broussard
After a few weeks of new iOS 10 features slowly being discovered by beta testers, one new 3D Touch-enabled shortcut was stumbled upon recently that will let users prioritize the bulk download of apps. When more than one app is installing, users on iOS 10 can 3D Touch to select "Prioritize Download" and temporarily pause the installation of other apps while the selected one gains favor. On...
Read Full Article 60 comments

2017 iPhone May Include Enhanced Taptic Engine for More Complex Vibrations

Tuesday May 31, 2016 7:46 am PDT by Joe Rossignol
In a report corroborating details about Apple moving towards an elongated three-year period between major iPhone refreshes, or a tick-tock-tock cycle, Japanese website Nikkei claimed that 2017 models will be equipped with a "high-performance motor" able to "create more complex tactile vibrations." The report does not provide additional details about the new motor, but it is reasonable to...
Read Full Article 125 comments

Wednesday February 24, 2016 9:25 am PST by Juli Clover
Chinese smartphone manufacturer Gionee debuted its Gionee Elife S8 at Mobile World Congress this week, and the new device mimics the iPhone in both look and functionality. Available in silver, gold, and rose gold shades, the Elife S8's exterior design more closely resembles an Android device than an iPhone, but it does have a similar rear camera, a 5.5-inch screen, a body that's 7mm thick, a...
Read Full Article 129 comments

Friday January 22, 2016 5:46 am PST by Tim Hardwick
Facebook has begun rolling out support for further 3D Touch actions on compatible iPhones in the latest update to its primary iOS app. The newest iteration in the social media company's series of weekly app updates allows iPhone 6s and iPhone 6s Plus owners to use "peek" and "pop" gestures directly from within a Facebook timeline. A light press or "peek" on a profile, link, page, group or...
Read Full Article 25 comments

Wednesday January 20, 2016 8:56 am PST by Juli Clover
The launch of the iPhone 6s and 6s Plus brought a new range of gestures to the iPhone, introducing 3D Touch. 3D Touch adds a pressure dimension to the traditional multi-touch controls on iOS devices to enable Peek and Pop, Quick Actions, pressure-sensitive drawing, and more. Because 3D Touch is an entirely new feature, it can be difficult to adjust to all of the available gestures and to find...
Read Full Article 82 comments

Wednesday December 16, 2015 10:51 am PST by Joe Rossignol
Apple has sent an email to its Developer Program members encouraging them to find out how their iOS apps can take advantage of 3D Touch on iPhone 6s and iPhone 6s Plus, signaling that the company would like to increase App Store adoption of the all-new pressure-sensitive feature. 3D Touch is a pressure-sensitive display technology that enables iPhone users to make "Peek" and "Pop" gestures...
Read Full Article 89 comments

Tuesday December 15, 2015 6:47 am PST by Joe Rossignol
KGI Securities analyst Ming-Chi Kuo has issued a research note obtained by MacRumors that predicts the iPad Air 3 will be released in the first half of 2016 and is unlikely to adopt 3D Touch because of production issues within Apple's supply chain. Kuo also believes the iPhone 7's pressure-sensitive 3D Touch display will have "similar technology and structure" as the iPhone 6s. The report...
Read Full Article 213 comments

Thursday December 10, 2015 3:22 am PST by Juli Clover
The team behind popular image editing app Pixelmator for Mac and iOS today announced a major update to its Pixelmator app for iOS, introducing full support and optimization for Apple's iPad Pro and Apple Pencil. There's a new palm rejection feature that allows users to rest their palms on the screen when sketching and editing images with the Apple Pencil, which works with more than 50 brushes...
Read Full Article 14 comments

Tuesday October 27, 2015 5:52 am PDT by Juli Clover
Astropad Mini, the app that turns the iPhone into a graphics tablet for the Mac, is getting a major update today to add new features to the iPhone 6s and the iPhone 6s Plus. The new version of the app includes support for 3D Touch, enabling pressure sensitive drawing. When using a finger or a stylus, the iPhone 6s or 6s Plus is able to detect 256 levels of pressure being on the screen, letting ...
Read Full Article 10 comments