Barclays: All 2019 iPhones May Lack 3D Touch, New AirPods and Lower-Priced HomePod to Launch Next Year

Barclays analyst Blayne Curtis and his associates traveled across Asia last week to meet with companies within Apple's supply chain. Today, they shared new predictions based on the information they gathered. 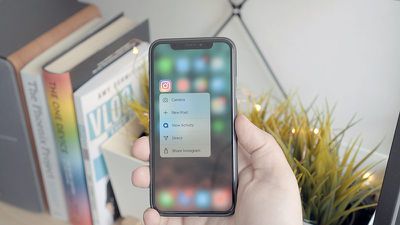 Highlights from their research note to investors, obtained by MacRumors:

While the lack of 3D Touch on the 6.1-inch iPhone would make sense, given expectations that it will essentially be a budget iPhone X, it's not entirely clear why it may be removed from the more expensive OLED models next year. As a somewhat hidden feature, perhaps Apple no longer finds it essential.

This prediction is rather confusing, as back in February, Bloomberg's Mark Gurman said Apple will release new AirPods with a new wireless chip and "Hey Siri" support as early as this year. Gurman also said a subsequent pair of AirPods with water resistance would be released as early as next year.

One possibility is that Apple will add "Hey Siri" support to the existing AirPods this fall by way of a software update, without a new wireless chip, but it's unclear if the current W1 chip can support the feature. In that case, Apple might elect to continue referring to them as first-generation AirPods.

In that scenario, the "AirPods 2" that Barclays is referring to could be the water-resistant pair that Gurman also believes could launch in 2019. However, this is admittedly a bit of a stretch, so it remains to be seen.

Apple analyst Ming-Chi Kuo, along with some Chinese publications, have also claimed that Apple has considered a lower-priced HomePod. One rumor suggested that it could be a Siri-enabled Beats speaker priced around $149 to $199.

Taiwanese research firm TrendForce predicted that the higher-end 2018 iPhones will be compatible with the Apple Pencil.

dannyyankou
The 3D Touch trackpad is reason enough to keep it.
Score: 36 Votes (Like | Disagree)

Blizzardman
Really hope this isn't true and they keep 3D touch around. I use it all the time and find it extremely useful.
Score: 29 Votes (Like | Disagree)

lsutigerfan1976
Never used that feature myself. As a matter of fact, i always forget that feature is even there.
Score: 22 Votes (Like | Disagree)

RedGala
If 3D Touch is removed, I will never buy any of those devices, and just settle for last year's iPhone X. My habit of pressing hard on screens for special actions is too ingrained in me.

I do see how removing it would be more consistent with the iPad relying on long presses to activate peeks and pops.
Score: 20 Votes (Like | Disagree)

casperes1996
3D Touch is a selling point for me. I'd hate to see it go. I'm expecting the supply chain may be confused by Apple implementing 3D Touch in a new way using different facilities maybe? - At least I'd hope for the feature to stay.
Score: 17 Votes (Like | Disagree)
Read All Comments