Facebook has begun rolling out support for further 3D Touch actions on compatible iPhones in the latest update to its primary iOS app.

The newest iteration in the social media company's series of weekly app updates allows iPhone 6s and iPhone 6s Plus owners to use "peek" and "pop" gestures directly from within a Facebook timeline. A light press or "peek" on a profile, link, page, group or photo triggers a preview of the content in question, while a harder press or "pop" opens the link, photo, profile or group.

A new "Quick Action" also comes to the Facebook app icon, with a homescreen shortcut that takes users directly to their account’s profile page. 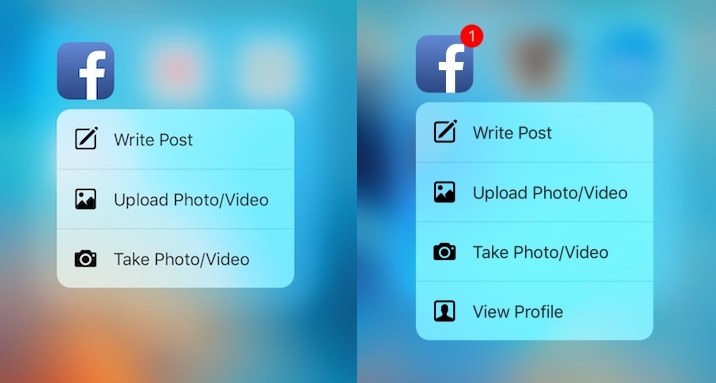 The introduction of new 3D Touch features follows support for several Quick Actions that Facebook brought to its app back in October. However, unlike the first 3D Touch-equipped update, the company is limiting access to the latest features to "a small group of people," before rolling them out globally "over the coming months," reports The Verge.

Despite the potential for frustrating some of its users, Facebook's gradual rollout strategy is in line with last month's muted announcement of staggered support for Live Photos, which allows Facebook users to share motion-enabled pictures taken on iPhone 6s and 6s Plus devices with followers running iOS 9.

Increased support for 3D Touch comes on the heels of similar features introduced in other Facebook-owned apps, including Messenger, Instagram and WhatsApp, while other third-party developers continue to implement and deploy their own support for the pressure-sensitive technology following Apple's own encouragement to do so.

Facebook is free on the App Store for iPhone and iPad. [Direct Link]

SteveJobs2.0
We need to be able to customize the 3D Touch shortcuts in the future.
Rating: 5 Votes

SimonTheSoundMa
This is newsworthy?
Rating: 3 Votes

You are one step closer to developing your first app.


Thanks, but I have 3 apps on the iOS App Store, 1 in the OS X App Store, and plenty more in various states of development (plus tons of Java and Python stuff that's platform independent.)
[doublepost=1453486656][/doublepost]

A front page story because Facebook added a 'view profile' option to the menu. WOW.


It's in the iOS blog, not the front page. If you're in the mobile layout, it doesn't split the different sections up - everything just gets lumped together.
Rating: 2 Votes

A front page story because Facebook added a 'view profile' option to the menu. WOW.

An iOS Blog story about changes to one of the more popular apps. Stories about lesser things have been written. Nothing new or surprising. If it's not of interest it can be easily skipped.
Rating: 1 Votes


It's in the blog, not news. If you don't find it interesting, don't read it, and especially do not post about your disinterest just to seek attention.

I find it to be news considering facebook no longer provides a changelog in the update description any more. It just says "we'll highlight changes for you in the app" but no where did it highlight for me that I can 3D touch the app to do anything at all.

Thats awesome. Share a link to your iOS apps. I'm curious to see them

This is the only one currently on the store. I pulled the others a few years ago when I decided it wasn't worth the time/effort to keep them updated.
https://appsto.re/us/STOb3.i
Rating: 1 Votes

Petereder
I deleted the Facebook app a long time ago. I don't miss it at all.
Rating: 1 Votes


A front page story because Facebook added a 'view profile' option to the menu. WOW.


If you don't like it, skip past it. There's always going to be news or blog posts that someone doesn't have an interest it, but others will.

I deleted the Facebook app a long time ago. I don't miss it at all.


Good for you. We need to know this why?
Rating: 1 Votes

jbailey1974
Nothing new on mine with latest update.
Rating: 1 Votes
[ Read All Comments ]