Four years after 3D Touch debuted on the iPhone 6s, the pressure-sensitive feature appears to be on the chopping block. 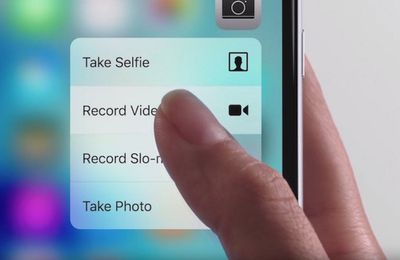 Last week, in a research note shared with MacRumors, a team of Barclays analysts "confirmed" that 3D Touch "will be eliminated" in all 2019 iPhones, as they predicted back in August 2018. The analysts gathered this information from Apple suppliers following a trip to Asia earlier this month.

This isn't the first time we've heard this rumor. The Wall Street Journal said the same thing back in January.

Apple already replaced ‌3D Touch‌ with Haptic Touch on the iPhone XR in order to achieve a nearly edge-to-edge LCD on the device, and it is likely the feature will be expanded to all 2019 iPhones. Haptic Touch is simply a marketing name for a long press combined with haptic feedback from the Taptic Engine.

It's unclear why Apple would remove ‌3D Touch‌ from the next-generation ‌iPhone‌ XS and ‌iPhone‌ XS Max, since Apple has already proven that it can integrate the feature into edge-to-edge OLED displays without issue.

‌Haptic Touch‌ on the ‌iPhone‌ XR works in fewer places than ‌3D Touch‌, including the flashlight and camera shortcuts on the lock screen, in Control Center to view hidden toggles, and to expand notifications. ‌Haptic Touch‌ does not support Quick Actions app menus or Peek and Pop for previewing content.

‌3D Touch‌ features: Quick Actions on left, Peek and Pop on right
Perhaps we'll see some hints that ‌3D Touch‌ is going away entirely in iOS 13, which Apple is expected to unveil at its WWDC 2019 keynote next Monday. That should be followed by new iPhones in September as usual.
Tags: 3D Touch, Haptic Touch Guide
Related Forum: iPhone
[ 337 comments ]

its93rc
This is a feature mostly everyone on here calls a gimmick but I love using. I hope they keep a variation of it on the new iPhone.
Score: 107 Votes (Like | Disagree)

Nimoy
I'm hoping this change is "invisible" because I use 3D Touch all the time. Also hoping we "get something" for it, like longer battery life.
Score: 55 Votes (Like | Disagree)

Biu_miu
Sad. It was really convenient to reply to texts/e-mails from lock screen with 3D Touch.
Score: 54 Votes (Like | Disagree)

Mike MA
Once you got used to 3D Touch you won’t want to miss it. Let’s see the reason why and the replacing feature and judge afterwards.
Score: 47 Votes (Like | Disagree)

Probably because nobody is using it. it's to unintuitive.

I disagree, I use it every day and once you learn which apps have the function built in, it's extremely intuitive. Being able to quickly see how far an address is when someone messages it to me is much better than opening it in another app, then moving back to the messages app to respond, you don't even have to move your thumb! Removing 3 steps to do the same thing, tripling the total time to accomplish the same task
Score: 46 Votes (Like | Disagree)

goobot
But I like 3D Touch. The real problem is Apple doesn’t know how to make software that highlights their hardware functions anymore. Since iOS 7 the whole ui sucks.
Score: 44 Votes (Like | Disagree)
Read All Comments