Apple has sent an email to its Developer Program members encouraging them to find out how their iOS apps can take advantage of 3D Touch on iPhone 6s and iPhone 6s Plus, signaling that the company would like to increase App Store adoption of the all-new pressure-sensitive feature. 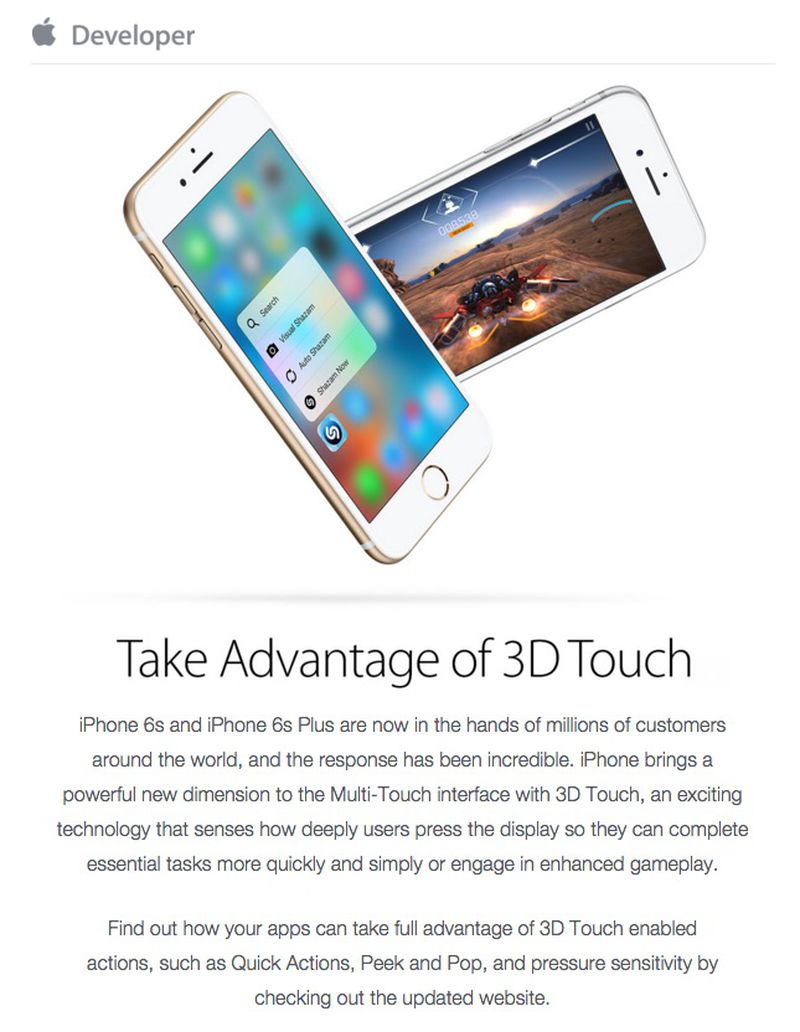 3D Touch is a pressure-sensitive display technology that enables iPhone users to make "Peek" and "Pop" gestures to access Quick Action shortcut menus, preview content within apps or animate Live Photos. The feature is one of the biggest new additions to the iPhone 6s and iPhone 6s Plus released in September.


Nevertheless, nearly three months later, a number of developers are only now beginning to update their apps with 3D Touch support. 3D Touch is also not as natural of an experience as multi-touch for some iPhone users, and it could take some time before the new feature becomes registered in muscle memory.

MacRumors shared a poll with our Twitter followers asking if they use 3D Touch, and the results are expectedly mixed. The poll, which has received nearly 4,000 votes and counting, will be live until December 17 at around 10:30 AM Pacific, so be sure to participate if you own an iPhone 6s or iPhone 6s Plus.

Do you use 3D Touch?

Recently, a number of popular iPhone apps were updated with 3D Touch support, including Adobe Photoshop Lightroom, Evernote, Facebook Messenger and Spotify. Other popular apps using 3D Touch are listed below, and more can be tracked on our sister website AppShopper by searching for "3D Touch."
The list above will be periodically updated with other popular 3D Touch apps.

Developers really do need to get on board with this amazing technology. I'm at the point now where I'm starting to delete apps that haven't bothered to do anything with 3D Touch. And I know I'm not the only one.


Sorry - are you serious - you've deleted apps just because they don't use 3d touch?
Rating: 17 Votes

Translation: something I have no use for = 'gimmick'.

Apple needs to do the same for split view. What a joke that none of Google's apps support it, even apps that have had several updates since iOS 9 was introduced.
Rating: 15 Votes

samcraig
Translation: Help us make this more than just a gimmick ;)
Rating: 10 Votes

nilk
I can't share the sentiment that 3D Touch is a gimmick. It's quite useful and I've incorporated it into my usage patterns to the point where I'd have a hard time giving it up. I get a little disappointed when apps don't use it where they could.

It does take some getting used to, but once you get the hang of it its great.
Rating: 7 Votes

reallynotnick
The other problem with 3D Touch is you can't design a full UI around it as you always have to have an alternative to it for users who don't have it.
Rating: 5 Votes

ArtOfWarfare
From a developer's perspective, I think the reason you don't add 3D touch is because few of your users will have access to it. Why waste the effort?

I'll start thinking about using 3D touch when I expect a higher percentage of my users to have it.
Rating: 5 Votes

69Mustang
In some apps, there's no value to adding 3D Touch (dumbest Apple name imo - Thanks Huawei!) just for the sake of adding it. That's when it could be qualified as a gimmick. Other apps could actually benefit from it. The problem occurs when people get used to using it and expect it in every app. Should developers add gimmickry for the sake of uniformity? I personally don't think so. Someone upthread suggested apps have a visual cue denoting 3DT support. I think that's a pretty good idea.
Rating: 5 Votes

Developers really do need to get on board with this amazing technology. I'm at the point now where I'm starting to delete apps that haven't bothered to do anything with 3D Touch. And I know I'm not the only one.

Lol really?
I only use mine a few times a month at the most when I remember. Older methods are still just as fast.
Rating: 3 Votes

Why should developers be blamed for not supporting a non-used feature?
Rating: 3 Votes
[ Read All Comments ]