The mysterious built-in accelerometer in the M2 MacBook Air is still seemingly not used, raising questions about why the device is the first Apple silicon Mac to contain the component. 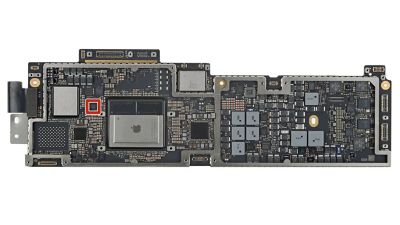 The ‌M2‌ ‌MacBook Air‌'s logic board, with the accelerometer highlighted (via iFixit).
During its first teardown of the new ‌MacBook Air‌ earlier this year, repair site iFixit discovered that the redesigned ‌MacBook Air‌ contains an accelerometer – making it the first Apple silicon Mac to contain such a component.

Accelerometers have been key to the iPhone and iPad since they launched, providing movement, rotation, speed, and acceleration data, but there is no obvious use-case for the component in an Apple silicon Mac, since it is much less likely to be subject to movement that influences use.

Some observers have speculated that the accelerometer may be used to determine if the laptop has been dropped for service and warranty purposes. Alternatively, it could be used to support video stabilization. Indeed, the Studio Display contains an accelerometer, but again, it is unclear what its purpose is within that device.

If it is not already used for a specific function, Apple could still release a software update in the future to take advantage of the accelerometer, but it seems to have not done so in the months since the launch of the ‌MacBook Air‌, even with the public release of macOS Ventura. Using a sensor in a device with no obvious purpose would not be unprecedented for Apple. Indeed, the HomePod mini contains a seemingly unused temperature and humidity sensor. Likewise, the 2008 iPod touch had a Bluetooth chip, but support for Bluetooth connectivity was only enabled the following year via a software update.

Along with the single 256GB NAND storage chip, iFixit's teardown revealed other logic board components that include the 64-bit 8-core ‌M2‌ chip, an Apple-designed Thunderbolt 3 driver, and a USI Bluetooth and Wi-Fi chip.