Apple's HomePod mini includes a dormant hidden sensor that can measure temperature and humidity, potentially providing the means to power upcoming features that could arrive in a future software update, according to Bloomberg. 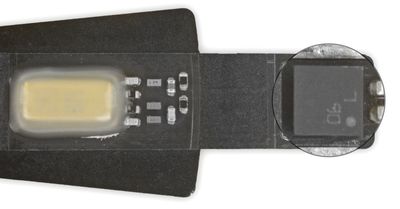 Humidity and temperature sensor from a ‌HomePod mini‌. Source: iFixit (via Bloomberg).
From Mark Gurman's report:


The company has internally discussed using the sensor to determine a room's temperature and humidity so internet-connected thermostats can adjust different parts of a home based on current conditions, according to people familiar with the situation. The hardware could also let the HomePod mini automatically trigger other actions, say turning a fan on or off, depending on the temperature.

Apple typically releases major HomePod software updates annually in the fall. It's unclear if or when Apple will switch on the temperature sensor, but its presence in HomePod mini units that have already sold suggests that this is just a matter of time. An Apple spokeswoman declined to comment.

The component measures 1.5 x 1.5mm and is buried in the bottom edge of the ‌HomePod mini‌'s plastic case, near the power cable. The sensor's existence was independently confirmed by iFixit after an inquiry by Bloomberg.

The sensor is made by Texas Instruments, which calls it a "HDC2010 Humidity and Temperature Digital Sensor," according to TechInsights, a firm that analyses components inside of electronics. According to the report, the component's placement suggests that its focus will lie in the external environment, rather than having any internal diagnostic role.

The part is situated relatively far from the device's main internal components, meaning it is designed to measure the external environment rather than the temperature of the speaker's other electronics.

This isn't the first time Apple has included a non-active component in a product and then enabled it at a later date via software. As Bloomberg notes, the 2008 iPod touch had a Bluetooth chip, but support for Bluetooth connectivity was enabled the following year via software.

If Apple decides to enable the sensor in the ‌HomePod mini‌, it could pave the way for a more integrated smart home strategy for HomeKit, which controls thermostats, lights, locks, plugs and other devices in the home.

As the report notes, it could also help Apple's ‌HomeKit‌ rival similar features already offered by competitors. For example. Amazon's latest Echo speakers include temperature sensors, while Google sells sensors under its Nest brand that can be placed around homes and connect to its thermostats to adjust the temperature of each room.

Squuiid
While they did point out that it is external in the article I still suspect this is more likely to be used for warranty exclusions due to use in overly humid environments like bathrooms. A bit like an iPhone water sensor.
But that’s just my cynical take.?
I hope to be proven wrong.
Score: 29 Votes (Like | Disagree)

Seems like the ideal device to get crowd sourced weather data from for the Apple Weather apps :)

How would you use room climate data for weather apps?!
Score: 19 Votes (Like | Disagree)

How does this relate to the temperature and humidity sensor?
Score: 17 Votes (Like | Disagree)

How would you use room climate data for weather apps?!

Justin Cymbal
That’s awesome! I have two HomePod minis that I use as the sound system hooked up to my Apple TV

At $99 the HomePod mini is a pretty impressive speaker- much better than Amazon’s Echo or Google Home
Score: 13 Votes (Like | Disagree)
Read All Comments