When Are iPhone 14 Pre-Orders?

Apple has now announced that it will hold an event on Wednesday, September 7 where the company is highly likely to unveil the ‌iPhone 14‌ lineup – so when are pre-orders of the new devices expected to begin? 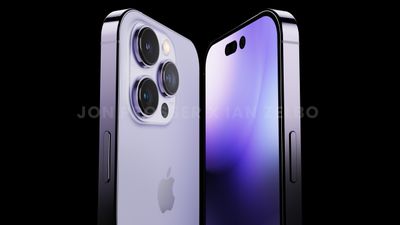 iPhone 14 concept render by Ian Zelbo based on purported leaked information
In a recent report that correctly predicted that an Apple event will take place on September 7, Bloomberg's Mark Gurman said that Apple has told some retail employees to prepare for a new product release on Friday, September 16, which suggests the new iPhone and Apple Watch models could see a launch date on that day.

Pre-orders for new ‌iPhone‌ models typically open one week before launch, meaning that Friday, September 9 seems like the most likely date, just two days after the Apple event.

The event, which features the tagline "Far out," will take place on Wednesday, September 7 at 10:00 a.m. Pacific Time and be streamed online for viewers around the world. Beyond the ‌iPhone 14‌ and ‌iPhone 14 Pro‌, the event could also see the announcement of the Apple Watch Series 8, the second-generation Apple Watch SE, and potentially several other announcements.

The standard ‌iPhone 14‌ models are expected to feature 50 percent more memory, improved battery life, an improved Ultra Wide camera, and an upgraded front-facing camera with autofocus, while the ‌iPhone 14 Pro‌ models are expected to feature "pill and hole-punch" shaped cutouts instead of the notch, the A16 chip, a 48-megapixel Wide camera, and a slightly taller display with thinner bezels. The entire lineup is set to come in a range of new color options.

Three new Apple Watch models are also expected, including the Apple Watch Series 8, the second-generation ‌Apple Watch SE‌, and a new "Pro" Apple Watch model. There are also believed to be plans to launch a new entry-level iPad, updated iPad Pro models, an Apple silicon Mac Pro, and more, but these devices could be saved for a second event later in the year.

When Is the iPhone 14 Apple Event?

Monday August 22, 2022 2:14 am PDT by Hartley Charlton
Update August 24: Apple has announced it will be holding an event on Wednesday, September 7 at 10:00 a.m. Pacific Time where we're expecting to see the iPhone 14 lineup, updated Apple Watch models, and perhaps some other announcements. Apple is currently expected to unveil the iPhone 14 lineup and the Apple Watch Series 8 at an event on Wednesday, September 7, according to a pivotal recent...
Read Full Article

Wednesday August 17, 2022 9:51 am PDT by Juli Clover
Apple is aiming to hold its first fall event on Wednesday, September 7, reports Bloomberg's Mark Gurman. The event will focus on the iPhone 14 models and the Apple Watch Series 8. The standard iPhone 14 models are expected to get few changes, but the iPhone 14 Pro models will include updated camera technology, the removal of the notch in favor of a pill-shaped and hole-punch cutout, an A16...
Read Full Article • 260 comments

Wednesday August 24, 2022 9:04 am PDT by Juli Clover
Apple today announced that it will be holding a special event on Wednesday, September 7 at 10:00 a.m. Pacific time. The event will take place at the Steve Jobs Theater on the Apple Park campus in Cupertino, California, and there will be an in-person component with members of the media invited to Apple's campus. Subscribe to the MacRumors YouTube channel for more videos. The September event...
Read Full Article • 297 comments

Friday August 12, 2022 2:34 pm PDT by Juli Clover
There's just about a month to go until Apple holds its annual September event focusing on new iPhone and Apple Watch models. We thought we'd take a quick look at everything that's rumored for Apple's September event to give MacRumors readers a rundown on what to expect when the first fall event rolls around. iPhone 14 The iPhone 14 can probably be described more as an "iPhone 13S" because...
Read Full Article • 167 comments

Order and Shipping Dates for All of Apple's Newly Announced Products

Thursday September 8, 2022 3:07 am PDT by Sami Fathi
Apple yesterday announced a slew of new products, ranging from four new iPhone 14 models, three new Apple Watches, and brand new AirPods Pro. With so many new products, you may be confused over when each product will be available for pre-order and in-store. To help, we've created a guide to make clear all the important dates related to Apple's latest products. Already Available for Pre-Order ...
Read Full Article • 13 comments

Thursday September 8, 2022 4:30 am PDT by Tim Hardwick
Apple has published a nine-minute video positioned as a tour of the iPhone 14 and 14 Pro, with the walkthrough pre-empting the availability of online pre-orders, which go live on Friday. Beginning at Apple's Upper West Side store in New York City, the tour highlights the four available sizes, new camera features like Action mode, Lock Screen customizations, the iPhone 14 Pro's Always-on...
Read Full Article • 27 comments