iPhone 13 vs. iPhone 14 Buyer's Guide: Should You Upgrade?

The iPhone 14 is among Apple's latest iPhones and follows last year's iPhone 13, but how different are the two successive iPhone generations? 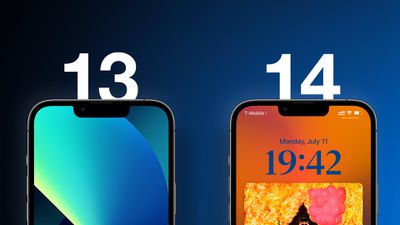 In 2021, Apple unveiled the ‌iPhone 13‌ as the successor to the popular iPhone 12, with improved rear cameras, longer battery life, the A15 Bionic chip, and more. As devices that are more affordable than the "Pro" models, but more full-featured than the low-cost iPhone SE, the ‌iPhone 14‌ will likely be the most popular option among customers, starting at a price of $799 for the 128GB model. The ‌iPhone 13‌ mini and ‌iPhone 13‌ continue to be available from Apple for $599 and $699, respectively.

As the ‌iPhone 13‌ and ‌iPhone 14‌ share the overwhelming majority of their features and have the same design, should you consider sticking with the ‌iPhone 13‌ to save money? Our guide helps to answer the question of how to decide which of these two ‌iPhone‌ models is best for you, and serves as a way to clearly see the differences that the ‌iPhone 14‌ brings to the table.

Comparing the iPhone 13 and iPhone 14

The ‌iPhone 13‌ and ‌iPhone 14‌ both feature the same display size, 5G connectivity, A15 Bionic chip, and design. Nevertheless, the ‌iPhone 14‌ still offers a number of upgrades, such as an additional GPU core, Emergency SOS via satellite, the Photonic Engine, and Action Mode.

The ‌iPhone 14‌'s upgrades over the ‌iPhone 13‌ are mostly iterative, offering small refinements in terms of photography and videography capabilities, battery life, and GPU performance. 6GB of memory, Crash Detection and Emergency SOS via satellite, three features that also come to the iPhone 14 Pro and ‌iPhone 14 Pro‌ Max, are more significant upgrades for the safety-conscious, as well as the enhanced camera hardware. That being said, the ‌iPhone 14‌ is probably best suited to those coming from an older device.

At face value, there is likely not enough to justify getting the new model over the ‌iPhone 13‌ for most customers. Matters may be different if you want a larger display size, however, as there is no equivalent to the ‌iPhone 14‌ Plus in the ‌iPhone 13‌ lineup.

The ‌iPhone 13‌ is still highly capable for everyday use, and ‌iPhone 14‌ shares the vast majority of the ‌iPhone 13‌'s most versatile features, such as the A15 Bionic chip, OLED Super Retina XDR display, Ceramic Shield, Night mode, MagSafe, and IP68 water resistance, so it may be better to wait for a more substantial upgrade.

AppliedMicro
No mini - no upgrade.
Score: 69 Votes (Like | Disagree)

schneeland
Based on experience from previous years, the answer to "should you upgrade from iPhone X to iPhone X+1?" is almost universally no. Same for Watch and iPad. The devices have all reached a maturity where they can easily be used for 3+ years.

That being said, I agree with previous comments that "should you upgrade" articles seem kind of ill-advised before the device in question is actually out.
Score: 33 Votes (Like | Disagree)

NoIdentity
ah yeah, a buyer's guide based on speculations. I recon, why buy the 13 or 14, heck skip until we reach 20. I heard the 20 will have killer features and way worth the wait. Considering the price jump between 16 and 17 will be very steep it only makes sense to upgrade when the 20 hits the market. Save up, until then. /s
Score: 23 Votes (Like | Disagree)

The 14 will be the best iPhone ever.

We think you’re going to love it.
Score: 14 Votes (Like | Disagree)
Read All Comments

iPhone 13 Pro vs. iPhone 14 Pro Buyer's Guide: Should You Upgrade?

Friday September 9, 2022 6:20 am PDT by Hartley Charlton
The iPhone 14 Pro is among Apple's latest iPhone models and follows last year's iPhone 13 Pro, but how different are the two successive high-end iPhone generations? In 2021, Apple unveiled the iPhone 13 Pro as the successor to the popular iPhone 12 Pro, featuring ProMotion displays, an improved rear camera system, the A15 Bionic chip, longer battery life, and more. The iPhone 13 Pro and...
Read Full Article • 237 comments

Friday September 16, 2022 6:34 am PDT by Hartley Charlton
The iPhone 14 Plus and iPhone 14 Pro Max are among Apple's latest iPhone models and follow last year's iPhone 13 mini and iPhone 13 Pro Max. Now that Apple is offering two iPhones with 6.7-inch displays, how different are the two models, and what exactly does a "Pro" device give you? Last year, the biggest differences between the iPhone 13 and iPhone 13 Pro were ProMotion, 2GB of memory,...
Read Full Article

Thursday September 15, 2022 7:04 am PDT by Hartley Charlton
Earlier this year, Apple unveiled the iPhone 14 and iPhone 14 Plus as the successors to the iPhone 13 mini and iPhone 13, featuring Emergency SOS via satellite, Crash Detection, longer battery life, a larger display option for the first time, and more. Instead of a "mini" device this year, Apple is offering a standard model with a 6.7-inch display for the first time – a display size previously...
Read Full Article • 0 comments

iPhone Mini Fans: What to Look Out for When the iPhone 14 Models Launch

Wednesday August 24, 2022 8:24 am PDT by Tim Hardwick
With no iPhone 14 mini expected to feature in Apple's upcoming iPhone 14 series lineup this September, we look at the best possible alternative iPhone options for those who prefer smaller form factor devices. iPhone sizes are changing this year, and Apple is widely believed to be eliminating the 5.4-inch iPhone mini from the iPhone 14 lineup, as the iPhone 13 mini was not popular enough with ...
Read Full Article • 160 comments

What to Expect From the September 7 Apple Event: iPhone 14, Apple Watch Series 8 and More

Friday September 2, 2022 10:32 am PDT by Juli Clover
Apple's annual iPhone-centric fall event is set to begin on Wednesday, September 7, and unlike last year, there will be an in-person component with members of the media invited to test out new devices. We've been hearing rumors about the next-generation iPhones for many months now, so we know the ins and outs of what to expect. Subscribe to the MacRumors YouTube channel for more videos. This...
Read Full Article • 149 comments

Sunday September 25, 2022 6:50 am PDT by Sami Fathi
Apple may decide to release its remaining products for 2022, which include updated iPad Pro, Mac mini, and 14-inch and 16-inch MacBook Pro models, through press releases on its website rather than a digital event, according to Bloomberg's Mark Gurman. In his latest Power On newsletter, Gurman said that Apple is currently "likely to release its remaining 2022 products via press releases,...
Read Full Article • 147 comments