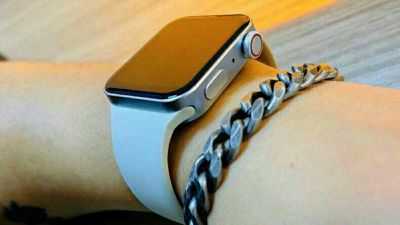 The images, shared in a tweet from the user known as "Majin Bu," show counterfeit clones of the Apple Watch Series 7 in Space Gray, Silver, and Space Black. The design of the clones closely matches the redesign that is expected to bring squared-off edges to the Apple Watch, much like those of the iPhone 12 lineup, iPad Air, iPad Pro, and 24-inch iMac.

Although the units in the images are clones and not legitimate Apple devices, they may give the best impression yet of what we can expect the new Apple Watch design to look like in the real world. Majin Bu explained that these Apple Watch Series 7 clones will sell for around $60 in China.

The design of the Apple Watch Series 7 has only been seen thus far in renders that were reportedly based on leaked images and alleged industry-sourced CAD renders, featuring two long speaker grilles along the left side of the device, squared-off edges, and a thinner casing.

Although the Apple Watch Series 7 is expected to be 1.7mm thinner than the Series 6, it is worth bearing in mind that this change may not have been carried over to the clones and the smartwatches depicted in these images may look thicker than the authentic devices.

Clones of popular Apple products are commonly made in China, often in the hopes of duping customers into thinking that they are the real thing. The issue is so widespread that Apple has a team whose sole focus is to crack down on counterfeit products and prevent them from being sold.

Earlier this year in March, images of third-generation AirPods clones emerged online. Given that these AirPods have yet to launch over half a year later, it goes to show how far in advance counterfeit manufacturing operations in China take place. Nevertheless, the range of images showing third-generation AirPods clones have given the clearest look yet at the expected design of the new wireless earbuds.

The Apple Watch Series 7 is expected to be unveiled by Apple as soon as next month, likely alongside the iPhone 13 lineup, offering improved display technology and Ultra Wideband connectivity, a faster processor, a bigger battery, and more.

HeavenDynamic
I hope the real one will be *way* thinner than that, otherwise it’s a clear regression compared to the actual design imo.
Score: 35 Votes (Like | Disagree)

satchmo
This is pretty ugly.
Score: 34 Votes (Like | Disagree)

mozumder
So does that mean the Apple Watch Series 7 will be a clone of them when it comes out?
Score: 32 Votes (Like | Disagree)

popdan
ugh... if this is the exact copy size then this would fail big time
Score: 30 Votes (Like | Disagree)

Mrjetsondc
About as ugly as my ex-wife, boom, roasted!
Score: 25 Votes (Like | Disagree)