Apple is considering offering an "Explorer Edition" variant of the Apple Watch that features a more rugged casing as soon as next year, according to reliable Bloomberg journalist Mark Gurman. 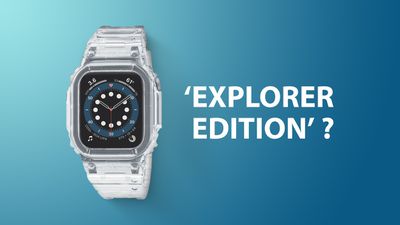 Gurman's report explains that Apple may release a rugged Apple Watch model to offer an appropriate option for individuals who need a more durable smartwatch:

Interestingly, Gurman says that this is not the first time Apple has considered a rugged version of its smartwatch. The company apparently mulled releasing a model that appeals to extreme sports athletes alongside the original Apple Watch, which launched in 2015.

If Apple goes ahead this time, the rugged version would be an additional model similar to how Apple offers a lower-cost option called the Apple Watch SE and special editions co-branded with Nike Inc. and Hermès International. Sometimes dubbed the "Explorer Edition" inside Apple, the product would have the same functionality as a standard Apple Watch but with extra impact-resistance and protection in the vein of Casio's G-Shock watches.

The latest Apple Watch models are water-resistant up to 50 meters, but Gurman suggests that Apple could make a new device more "rugged" with a rubberized, impact-resistant casing, making it less susceptible to damage in extreme environments compared to the current selection of aluminum, titanium, and stainless steel cases.

It is likely that an Explorer Edition Apple Watch would be able to cope with problematic substances like chemicals, dust, and sand more effectively. Such a model would likely appeal to athletes and hikers as Gurman mentions, but also individuals who are often in challenging environments, such as construction workers.

There is also the Apple Watch Nike edition, featuring unique, lightweight bands for exercise, and the Apple Watch Hermès offers designer leather bands and exclusive classic-style watch faces. It does not seem out of the question, therefore, that Apple could add another "Explorer Edition" variant to the lineup.

Gurman initially said that the Explorer Edition could arrive as soon as this year, but has since explained that it is more likely to launch in 2022 at the earliest. He also included the caveat that his sources say it could be ultimately canceled or delayed.

The Apple Watch Series 7 is expected to launch later this year. While there have been reports of micro-LED displays and solid-state buttons with haptic feedback for the Apple Watch, these features are not expected to arrive this year. Instead, Gurman has said we can expect a display with slimmer bezels, a faster chip, and upgraded Ultra Wideband connectivity.

Thursday September 29, 2022 7:44 am PDT by Juli Clover
The iPhone 14 Pro and Pro Max introduce some major improvements in camera technology, adding a 48-megapixel lens and low-light improvements across all lenses with the new Photonic Engine. We've spent the last week working on an in-depth comparison that pits the new iPhone 14 Pro Max against the prior-generation iPhone 13 Pro Max to see just how much better the iPhone 14 Pro Max can be. Subscrib ...
Read Full Article • 103 comments

Thursday September 29, 2022 12:38 pm PDT by Juli Clover
Tony Blevins, Apple's vice president of procurement, is set to depart the company after he made a crude comment about his profession in a recent TikTok video, reports Bloomberg. Blevins was in a video by TikTok creator Daniel Mac, who was doing a series on the jobs of people he spotted with expensive cars. After seeing Blevins in an expensive Mercedes-Benz SLR McLaren, Mac asked Blevins what ...
Read Full Article • 537 comments