With Apple now enforcing its App Tracking Transparency rules with the release of iOS 14.5, The Wall Street Journal's Joanna Stern did an interview with Apple software engineering chief Craig Federighi to talk about Apple's aim with the feature and how it works.


For those unfamiliar with App Tracking Transparency, it requires app developers to get express user permission before accessing a user's advertising identifier for ad tracking purposes.

According to Federighi, Apple wanted users to have a choice over when and how they're tracked and how their data is used.

"These devices are so intimately a part of our lives and contain so much of what we're thinking and where we've been and who we've been with that users deserve and need control of that information." He added, "The abuses can range from creepy to dangerous."

Stern also spoke to Facebook's vice president of Ads & Business Product Marketing, who said that people would opt out of ads "without understanding the impact" because of Apple's lack of explanation. He said Facebook is concerned people will opt out because of the prompt, leading to an internet with "more paywalls" and where small businesses are unable to reach their customers.

Facebook has been in a sustained campaign against the App Tracking Transparency changes in iOS 14.5, claiming that Apple is anti-small business and going as far as taking out newspaper ads. Federighi said that Apple was not surprised there was pushback from companies like Facebook, but was "confident it's the right thing." He says the delay in implementation (it was originally slated to be enforced months earlier) was not because of backlash but because Apple wanted to give developers time to adjust to the changes.

When a user declines to allow an app to access the IFDA of the iPhone, iPad, or Apple TV, app developers are also prevented from using other means to create a profile of a user with device data and usage habits. App developers found trying to use covert tracking methods will violate Apple's rules. Federighi said that developers who don't follow the guidelines "might not be able to provide updates or their apps could even be removed from the store."

Users can turn off tracking all together in the Privacy section of the Settings app under "Tracking," or let apps ask on an app by app basis.

Business owners and ad industry executives told Stern that people should allow tracking to enable relevant ads that pertain to them, to support small businesses, and to keep the internet free. Users who allow apps to ask about tracking will see popups explaining why users should grant permission. 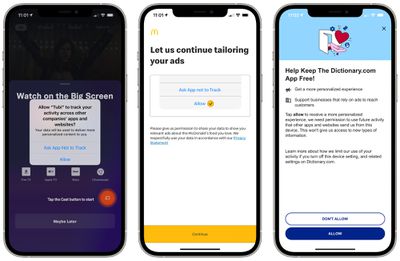 During the beta testing period, metrics gathered by AppsFlyer found a 26 percent opt-in rate per app across close to 550 apps, so some users may still opt to use tracking for their favorite brands.

RedTheReader
Nice. So, uh, when’ll we have the option to encrypt iCloud services and data?
Score: 20 Votes (Like | Disagree)

guzhogi
My philosophy: if you're an app developer and can't make a profit without taking & selling a person's info without their consent, much less knowledge, then you have a poor business model.
Score: 13 Votes (Like | Disagree)

GizmoDVD
My GF was talking to me on the phone last week about how to play the lottery. I've never done it before, never googled it etc.

What does Facebook greet me with? ads for the Lottery.

Just sayin...
“...users deserve and need control of that information...”

“...users deserve and need control of that information...”

Probably never. They don’t want customers to have to deal with the experience of losing access to their most important files because they misplaced the password.

It sucks but I can somewhat understand their perspective.
Score: 6 Votes (Like | Disagree)