Facebook has today attacked Apple in a series of full-page newspaper ads, asserting that iOS 14's privacy changes regarding data gathering and targeted advertising are bad for small businesses (via Bloomberg).

The ads are running in the New York Times, Wall Street Journal, and Washington Post, feature the headline "We're standing up to Apple for small businesses everywhere." 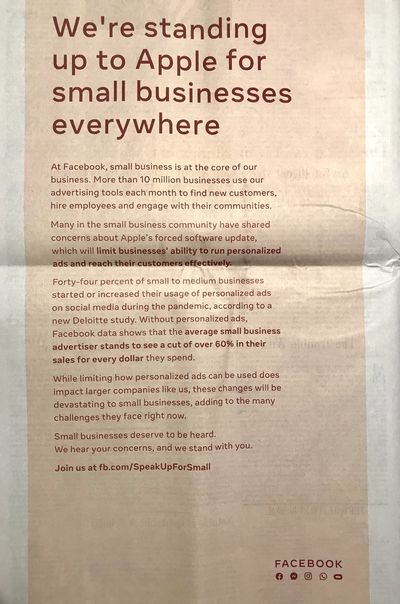 Earlier this year, Apple introduced a number of privacy changes that curb the ability of companies like Facebook to gather data on users and target adverts. In ‌iOS 14‌, Apple has made the "Identifier for Advertisers," used by Facebook and its advertising partners for ad targeting, an opt-in feature, providing more transparency for users who would prefer not to be tracked in apps and on websites. The update simply asks users if they want to agree to ad tracking or prevent cross-app and cross-site tracking to provide targeted ads.

‌iOS 14‌ also has a prominent "Tracking" section in the Privacy portion of the Settings app, where users can disable the option for apps to track them altogether. Even if this feature is toggled off, apps must still ask permission to track users across apps and websites owned by other companies, which is a blow to the silent ad-related tracking that has been going on behind the scenes.

Facebook has previously cautioned that Apple's changes would lead to difficulties, not only for its own business model, but also for small businesses who use its platform to advertise. Facebook claims that ads displayed without personalized targeting generate 60 percent fewer sales than ads that do target consumers.

Apple responded to the criticisms after delaying the rollout of the new privacy measures, accusing Facebook of making clear its intent "to collect as much data as possible across both first and third party products to develop and monetize detailed profiles of their users, and this disregard for user privacy continues to expand to include more of their products."

The full-page ads are the latest salvo in the increasingly heated tensions between the companies. Facebook has heavily criticized Apple in recent months, chastising the company's App Store policies, "stranglehold as a gatekeeper," and fees structure. It has also repeatedly leveled accusations of anti-competitive conduct at Apple, such as for disallowing Messenger from being selected as the default on iOS.

mollyc
Because when I think small business, Facebook is the first company that comes to mind.
Score: 166 Votes (Like | Disagree)

guzhogi
While I want to support local businesses, I also want to keep some privacy.

I also find the attached picture ironic. Probably the most trackers by far I've seen compared to many of the other sites that I've been to.

sentiblue
No... they are not standing up for small businesses.
They are just sour that they can't harvest user's information so they attack Apple. Simple as that!
Score: 43 Votes (Like | Disagree)

ajalbawab
It's a diversion tactic. Yes of course, personalized ads genuinely target people on a much smaller cost basis. Unfortunately, Facebook uses that data for other reasons. I'm interested to see if all the tech giants take down each other (domino effect) or if one giant, Facebook in this case, speaks up and loses popularity.

What's funny is that Facebook used a non-personalized ad in the Wall Street Journal - showing their ability to not need personalized ads! :)
Score: 39 Votes (Like | Disagree)

spinedoc77
Seems like this will backfire and just put a light on their practices. Just make things opt in instead of opt out.
Score: 35 Votes (Like | Disagree)
Read All Comments