It was a big week for software this week, with Apple kicking off a new round of betas for its operating systems with plenty of tweaks and changes in iOS 14.5 and related updates. We also saw the public release of macOS 11.2, which trailed last week's release of iOS 14.4. 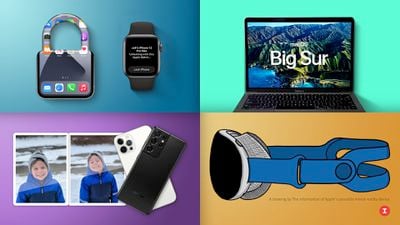 In other news, we got some significant new rumors about Apple's VR headset project and the Apple Car, while over on our YouTube channel we put the iPhone 12 Pro Max and the Samsung Galaxy S21 Ultra head-to-head in a blind camera test. Read on for details on these stories and more below!

iOS 14.5 and iPadOS 14.5 Betas Released With Many New Features

Apple this week seeded the first betas of iOS 14.5 and iPadOS 14.5 to developers and public beta testers. These updates are packed with new features for iPhone and iPad users, including the ability to unlock an iPhone with an Apple Watch while wearing a mask, support for 5G in Dual-SIM mode on iPhone 12 models, support for the latest PS5 and Xbox Series X controllers, AirPlay 2 streaming for Apple Fitness+, and more.

We've shared a hands-on video of unlocking an iPhone with the Apple Watch, which is a welcomed solution to Face ID not working properly with masks. We've also rounded up everything new in the first iOS 14.5 and iPadOS 14.5 betas, including hidden code-level changes.

Starting with iOS 14.5 and iPadOS 14.5, Apple is also enforcing its App Tracking Transparency privacy measure, requiring app developers to get consent from users to track their activity across other apps and websites for targeted advertising purposes.

Apple later pushed out a revised version of the first iOS 14.5 and iPadOS 14.5 betas with minor fixes.

This week saw the public release of macOS 11.2, which improves Bluetooth reliability and addresses several bugs, including an issue where external displays might show a black screen when connected to an M1-based Mac mini using an HDMI to DVI converter.

Note that some users are still experiencing other external display issues on macOS 11.2.

The release of macOS 11.2 was quickly followed by the first beta of macOS 11.3, which introduces more customization options in Safari, adds improved sorting options in the Reminders app, enhances the Support tab for warranty coverage in the About This Mac menu, allows stereo-paired HomePods to be set as the default sound output for a Mac, and more.

Other betas released this week include watchOS 7.4 and tvOS 14.5.

Samsung in January debuted its latest flagship smartphone lineup, which includes the Galaxy S21 Ultra, a direct competitor to the iPhone 12 Pro Max that Apple introduced in October. In our latest YouTube video, we pitted the two smartphones against one another for a blind camera comparison.

The idea is to look at the images and decide which aesthetic you prefer — "A" or "B" — before we unveil which camera is which at the end of the video. Share your choices in the comments section.

Apple is widely rumored to be working on a virtual reality headset, and a report this week from The Information's Alex Heath and Wayne Ma outlined several potential features and other details.

The report claimed that the headset will be equipped with more than a dozen cameras for tracking hand movements, along with two ultra-high-resolution 8K displays and advanced eye-tracking technology. The cameras would be able to pass video of the real world through the visor and display it to the user, providing a "mixed-reality effect" that is a step beyond virtual reality.

The report also claimed that the headset will have interchangeable headbands, with one featuring spatial audio technology like the AirPods Pro for a surround sound-like experience, and another providing additional battery life on the go. Similar to AirPods Max replacement ear cushions, it is possible that the headbands will be offered in a variety of colors as well.

Apple has internally discussed pricing the headset around $3,000, according to the report. This price would certainly make Apple's headset a high-end, niche product, with the company apparently setting an internal goal of shipping only 250,000 units of the headset in the first year of its release. Multiple reports have said the headset will be released in 2022 at the earliest.

There continues to be a lot of rumors surrounding the so-called Apple Car, with a partnership between Apple and Korean automaker Hyundai looking increasingly likely based on a pair of reports this week.

The first report came from analyst Ming-Chi Kuo, who said that Apple's electric vehicle chassis will be based on Hyundai's E-GMP battery electric vehicle (BEV) platform, which could allow for a range of over 300 miles, acceleration from 0-60 miles per hour in as little as 3.5 seconds, a top speed of 160 miles per hour, up to an 80% charge within 18 minutes, and more.

A second report out of Korea claimed that Apple is planning to invest the equivalent of $3.6 billion in Hyundai subsidiary Kia as part of a planned manufacturing partnership between the two companies that would see Kia build Apple Cars at its U.S. facility located in Georgia.

It's believed that the Apple Car is still years away from being released, with projections ranging from 2024 all the way to 2028.

Just kill the Apple Car already. I never understood getting into the full auto industry. Car systems that auto manufacturers can implement, yes. Yet a full Apple branded car? I just don’t see it.

The health industry is a no brainer.

I have to agree with you here.

I don't want Apple to become a "jack of all trades, master of none."

They already started neglecting the Mac a bit after the iPhone really took off; thankfully they're walking this back and giving the Mac some great attention again.

With their foray into the TV and movie business I worry that they're already spread too thin and that getting into the car business will just make it worse. I'd much prefer they remain a more focused company and stay good what they do.
Score: 2 Votes (Like | Disagree)

arkmannj
$3k for the VR headset.... that better have a full body haptic feedback suits, like in "Ready Player One"
but even then, that's likely out of my budget unless maybe it can also do full AR and then become virtual monitors that I can quickly switch between multiple machines. Not needing so many physical monitors all day for work would be great, until my neck starts hurting from wearing a headset for 13 hours.
Score: 1 Votes (Like | Disagree)

PSeg90
I thought that first image was an Apple Purse...

When I touch the Watch face with 2 fingers the time is vocalized. It could also include today's date.

Why don’t you just use your Apple Watch for Apple Pay?
Score: 1 Votes (Like | Disagree)

mnemonix
Hmmm, $3000 for an Apple VR headset or $300 for the Occulus Quest... There is currently nothing Apple can do in the VR headset market to justify this price, doesn't matter what the specs are or how nice it looks as the use cases are yet to be proved, no one will wear one outside the home and whatever the cost it will make you feel sick.
Score: 1 Votes (Like | Disagree)
Read All Comments