Apple today announced that its App Tracking Transparency privacy measure will be required starting with the next beta versions of iOS 14, iPadOS 14, and tvOS 14. Apple says the software updates will be publicly released in the early spring. 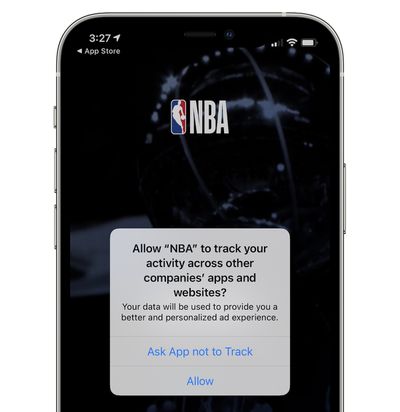 The requirement was originally set to go into effect last September, but Apple delayed to provide developers with more time to prepare.

With this change, all iPhone, iPad, and Apple TV app developers will need to receive a user's permission to track their activity across other apps and websites and access their device's random advertising identifier, known as the Identifier for Advertisers (IDFA), for targeted advertising purposes or to measure how effective their campaigns were.

Users will be presented with a prompt with options to "Allow Tracking" or "Ask App not to Track" when opening apps that wish to track their activity. Developers have already been able to add the tracking prompt to their apps in prior versions of iOS 14, iPadOS 14, and tvOS 14, using the App Tracking Transparency framework, but it has not been required and few apps have implemented the prompt voluntarily.

If a user selects "Ask App not to Track," Apple will block the app's developer from accessing the user's IDFA. The developer is also required to respect the user's tracking preference in general, meaning that they cannot use other methods to track the user, or else their app may face removal from the App Store, according to Apple.

Users can manage their tracking preferences on an app-by-app basis in the Settings app under Privacy > Tracking on iOS 14.

A handful of ad networks and companies have criticized Apple's decision, including Facebook, which ran full-page newspaper ads and launched a website claiming that Apple's tracking change will hurt small businesses financially.

The non-profit Electronic Frontier Foundation called Facebook's criticism "laughable," claiming that Facebook's campaign against Apple is really about "what Facebook stands to lose if its users learn more about exactly what it and other data brokers are up to behind the scenes." Firefox maker Mozilla also backed Apple's decision, calling it a "huge win for consumers."

Google has not publicly attacked Apple's decision, but in a blog post yesterday, the company warned developers that they may see a "significant impact" to their Google ad revenue on iOS once the App Tracking Transparency requirement begins. Google also said it will stop collecting IDFAs across its iOS apps so that it does not have to present users with Apple's tracking permission prompt in those apps.

Apple's stance is that users deserve control and transparency.

"We believe that this is a simple matter of standing up for our users," said Apple, adding that "users should know when their data is being collected and shared across other apps and websites — and they should have the choice to allow that or not."

Apple's announcement is timed with Data Privacy Day. Apple has commemorated the day by sharing "A Day in the Life of Your Data," a PDF report that explains how third-party companies track user data across websites and apps, highlights Apple's privacy principles, and provides more details about App Tracking Transparency.


Apple CEO Tim Cook will be speaking on data privacy today at the Computers, Privacy, and Data Protection conference, based in Brussels. Cook is scheduled to speak at 8:15 a.m. Pacific Time, and a live stream will be available on YouTube.
Tag: App Tracking Transparency
Related Forum: iOS 14
[ 69 comments ]

eicca
If your business relies on sneaky covert data collection then you need to rethink your business. Bravo Apple.
Score: 17 Votes (Like | Disagree)

AmazeSE
This is something only Apple can do. Imagine Google releasing a privacy update like Apple to all Android Smartphones.
That would be destructive for them. They would lose a lot of money. It's suicidal. This is why only Apple can be trusted with Privacy since Apple's business model does not depend on Ads and tracking unlike Google or Facebook.
Score: 15 Votes (Like | Disagree)

BWhaler
Thank you Apple for providing the choice to protect my family. Facebook, Sheryl Sandberg, and Zuck are pathetic.
Score: 14 Votes (Like | Disagree)

timborama
“The developer is also required to respect the user's tracking preference in general”.

This is something only Apple can do. Imagine Google releasing a privacy update like Apple to all Android Smartphones.
That would be destructive for them. They would lose a lot of money. It's suicidal. This is why only Apple can be trusted with Privacy since Apple's business model does not depend on Ads and tracking unlike Google or Facebook.

If google releases an similar privacy option like Apple does, it will have a method named isAccessible() and it's always return TRUE whether end-user toggles ON or OFF.
Score: 7 Votes (Like | Disagree)

Am I missing something here? To me, what this above statement says, is that Google isn’t going to abide by the new guidelines...

Exactly. Everyone giving kudos to Apple is falling for its marketing. Apple is making a virtue of increasing a tiny bit of privacy knowing full well there are other ways for companies to track us. In time, Apple will block some of these while leaving other tracking methods untouched.

This is not about privacy. This is about Apple pretending to be the privacy champion for their own profit.

No, it means Google is abiding by the new guidelines, and that they opted to not track (via this particular means), rather than have to ask to track. Whether they have some workaround remains to be seen.

It’s a very cynical and unsubstantiated view to call Apple virtue signaling here when they are taking concrete steps to promote transparency and user control. It’s a complex issue for sure and this won’t completely solve it, but it makes a significant impact. The evidence for that is in the reaction of Facebook. Yes, Apple may be profiting as well, but as a consumer I don’t care about that. I only care if they’re taking action steps to protect my data.
Score: 6 Votes (Like | Disagree)
Read All Comments

Tuesday January 24, 2023 1:11 pm PST by Joe Rossignol
While the new Mac mini with the M2 chip has a lower $599 starting price, the base model with 256GB of storage has slower SSD read and write speeds compared to the previous-generation model with the M1 chip and 256GB of storage. A teardown of the new Mac mini shared by YouTube channel Brandon Geekabit reveals that the 256GB model is equipped with only a single 256GB storage chip, while the...
Read Full Article • 550 comments