Samsung in January debuted its latest flagship smartphone lineup, which includes the Galaxy S21 Ultra, a direct competitor to the iPhone 12 Pro Max that Apple introduced in October. In our latest YouTube video, we pitted the two smartphones against one another for a blind camera comparison.

Subscribe to the MacRumors YouTube channel for more videos.
In the video up above and the photos in this article, we've labeled images with an "A" or a "B," with each letter corresponding to a different smartphone. All of the images are straight from the camera with no editing. 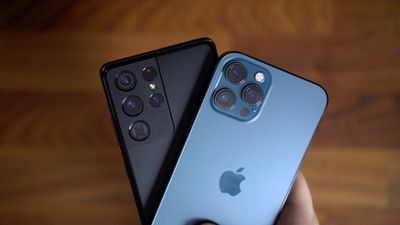 The idea is to look at the images and decide which aesthetic you prefer before we unveil which camera is which, so for the full experience, it's worth watching our video, but we'll also share the results at the very bottom of this article.

We've compared several different camera modes like Portrait mode and Night mode, along with the different lens options ranging from ultra wide angle to telephoto. When considering the photos, check out elements like color temperature differences, highlights and whether there are blown out (overly bright) areas, sharpness of the subject in Portrait photos, and for video, stabilization and shakiness.

Both the ‌iPhone 12 Pro Max‌ and Galaxy S21 Ultra have fantastic camera hardware and are capable of capturing great images in most lighting conditions, so most of the time, choosing a winner just comes down to your personal preferences.

Since we're not doing a traditional comparison between these two smartphones, there are a few Galaxy S21 features that are worth highlighting. Samsung used to limit its stylus, the S-Pen, to Note models, but this year, the S-Pen is compatible with the Galaxy S21 Ultra, and it's useful for taking notes, drawing, signing documents, and more.

There's also a reverse wireless charging feature for charging up headphones or another smartphone, and an in-display ultrasonic fingerprint sensor, which is actually something that we might see Apple adopt in the future.

As for the camera, there are four lenses including ultra wide (12MP), wide (108MP w/ laser autofocus), and dual telephoto lenses (both 10MP). Camera functionality is similar to the ‌iPhone 12 Pro Max‌ for the most part, but Samsung does have Space Zoom, which is a 100x digital + optical zoom option. Space Zoom was available last year, but this year it's been improved. The ‌iPhone 12 Pro Max‌ has no equivalent feature and can't zoom in as far.

The Galaxy S21 Ultra also has a shorter minimal focusing distance, allowing it to be used for close-up macro shots, something the iPhone 12 models aren't able to do.

Coming back to the photo comparison test, if you're wondering which photos are which, there's an answer below the break.

Apple's algorithms for the sky are designed to boost the color, trending towards a blue, cool tone during the day that's highly recognizable compared to the Galaxy S21 Ultra. The ‌iPhone 12 Pro Max‌ photos are more vibrant, while the S21 Ultra has a flatter color profile. Neither is quite true to life, with the real color somewhere in the middle.

Clarity and sharpness are similar for both smartphones, and in general, all of the pictures are crisp and clear. Portrait mode photos are more or less the same, but Apple's iPhones have always struggled with certain items like drinking glasses.

There are notable differences in Night mode. The S21 Ultra doesn't do well with warm lighting in some situations, so some of these photos have a tint that tends toward being too warm. Video is also similar (everything was captured in 4K at 30fps), with no major differences in quality or stabilization.

Which photos did you prefer from the camera test? Were you surprised at the results? Let us know in the comments.

Ron21
I picked A for almost all and thought that was going to be the Samsung ?
Score: 21 Votes (Like | Disagree)

thermal
If they really want to compare two cameras, I wish they'd put them on a tripod and take identical photos with each phone, so we have a true side by side comparison. For example, the playground slide photos are very different side by side.
Score: 13 Votes (Like | Disagree)

Baymowe335
Just scrolling through, I mostly prefer A Images except the night mode might be a little too artificially bright.
Score: 12 Votes (Like | Disagree)

Apple fanboy comparison. What do you expect?

How can it be fanboy comparison when it’s a blind test? You pick your preference that’s it
Score: 8 Votes (Like | Disagree)

I picked A for almost all and thought that was going to be the Samsung ?

QCassidy352
I preferred the "A" images but also thought they might be less accurate in terms of reproducing how the subjects of the photos looked to the naked eye. Having not seen the subjects myself I can't say for sure, but the "A" images look a little more "processed." That said, both cameras produced fantastic shots... can't complain either way.
Score: 5 Votes (Like | Disagree)
Read All Comments