Apple is rumored to be working on a virtual reality headset for launch as early as next year, and The Information today reported on some potential features to expect, based on information shared by a source with direct knowledge of the device. 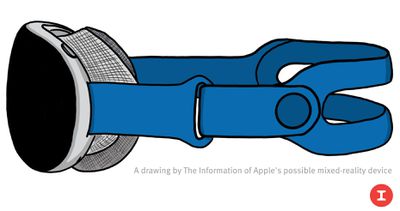 The report claims that the headset will be equipped with more than a dozen cameras for tracking hand movements, along with two ultra-high-resolution 8K displays and advanced eye-tracking technology. The cameras would be able to pass video of the real world through the visor and display it to the user, creating a "mixed-reality effect."

The Information said it viewed internal Apple images of a "late-stage prototype" of the headset from last year, which show a "sleek, curved visor attached to the face by a mesh material and swappable headbands."

The report claims one headband would feature spatial audio technology like the AirPods Pro for a surround sound-like experience, while another optional headband would provide additional battery life on the go. Similar to AirPods Max replacement ear cushions, it is possible that the headbands will be offered in a variety of colors as well.

Apple is said to be developing multiple ways to control the headset, including a "thimble-like device to be worn on a person's finger." The headset would also be able to respond to the wearer's eye movements and hand gestures, the report claims, while one prototype of the headset also had a physical dial on the visor's side.

Apple has internally discussed pricing the headset around $3,000, according to the report, which would place it within the ballpark of Microsoft's mixed reality HoloLens 2 headset, which retails for $3,500. This price would certainly make Apple's headset a high-end, niche product, with the company apparently setting an internal goal of shipping only 250,000 units of the headset in the first year of its release.

Some of these details have been previously reported by Bloomberg's Mark Gurman, CNET, and other sources, and The Information agrees that the headset will likely be released in 2022 at the earliest. Apple is also rumored to be working on a pair of sleeker, more affordable augmented reality glasses, but those are not expected until 2023 or later.

robertcoogan
I'm not buying it until I can get the $400 wheels as an accessory.
Score: 11 Votes (Like | Disagree)

neilw
I'll believe dual 8K displays when I see it.

Also, in general, I can't see the purpose in Apple releasing a $3000 VR headset. What's the point?
Score: 9 Votes (Like | Disagree)